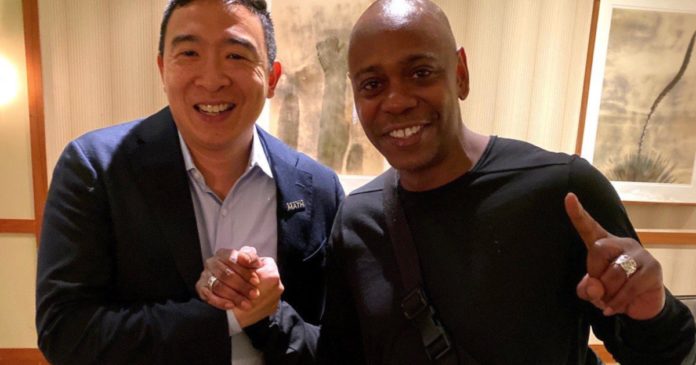 Dave Chappelle is officially a member of the “Yang Gang.” The comedian has endorsed Andrew Yang for president, the candidate revealed in a Tweet on Tuesday.

“Thank you @DaveChappelle and welcome to the #yanggang. You are the best. Let’s do this for our kids,” Yang wrote, sharing a photo of himself with Chappelle. The tweet was posted at a seemingly strategic time — the day of the Iowa Democratic debate, which Yang did not qualify for and could not participate in.

Yang also revealed during a campaign event Tuesday that Chappelle would be headlining two shows in South Carolina to benefit his campaign.

Chappelle is just one of several celebrities who have shown support for Yang. During the debate, Yang retweeted a positive message from former “Saturday Night Live” actor Norm MacDonald. “I’ll tell you who is not afraid of Climate Change? Robots!!!!!!! #YangGang,” MacDonald wrote.

Another comedian, Ken Jeong, joined the Yang Gang last year, and actor and musician Donald Glover attended a pop-up campaign event in Los Angeles with the entrepreneur-turned-candidate. Comedian Hannibal Buress tweeted he was in the Yang Gang and later deleted it, but Yang’s “thank you” reply remains on Twitter.

The list of celebrity endorsements is something of a mismatched crew. Actress Terri Hatcher shared her support for Yang on Instagram, and in March 2019 Yang tweeted that he suspected Nicolas Cage to be one of his donors. A rep for Cage later confirmed to Rolling Stone that the actor had donated to the campaign.

Some top tech entrepreneurs have also endorsed Yang, who worked with several startups himself. Elon Musk and Twitter’s Jack Dorsey have shown support for Yang, with Musk simply tweeting: “I support Yang.”