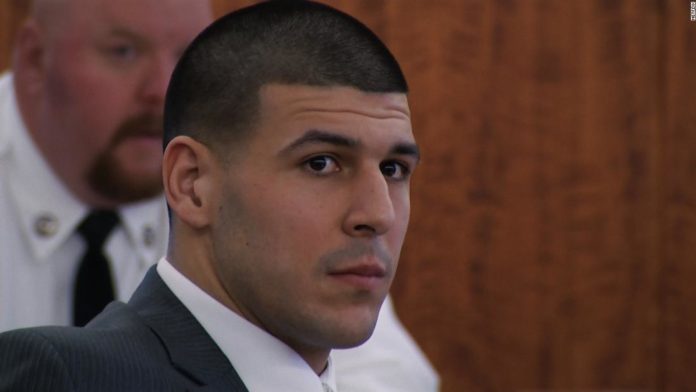 Neither, however, clearly answers the fundamental question: What prompted a young man with seemingly boundless opportunities to throw his life away? What viewers get, instead, are plenty of salacious but conflicting details, which don’t bring us much closer to understanding why.
Netflix’s “Killer Inside: The Mind of Aaron Hernandez” makes a more valiant effort to find the truth, at least in terms of probing causes of his behavior. Investigation Discovery follows with
“Aaron Hernandez: An ID Murder Mystery,” a more dutiful tick-tock of the criminal trial (its primary sources are journalists who followed the case), complete with the usual cheesy reenactments — a tactic, unfortunately, that “Killer Inside” also employs, just a bit more judiciously.
A star athlete in Bristol, Conn., Hernandez grew up with a stern father who also played football, becoming a standout in high school and at Florida before being signed by the New England Patriots.
Small wonder that widespread shock greeted the news in 2013 when Hernandez was charged, and later convicted, in the murder of Odin Lloyd, the 27-year-old boyfriend of his fiancee’s sister, and subsequently accused of a separate double homicide.
With a $40-million NFL contract and outwardly enviable existence, as a friend says, “None of it made sense.”
Both programs try, mostly in vain, to make sense of it, contemplating a host of potential contributing factors, the most serious being CTE, the brain injury caused by repetitive contact that has plagued many football players.
As “Killer Inside” makes clear, the league’s emphasis on protecting its multibillion-dollar product, as opposed to promoting the health and safety of players, has often impeded a full-throated discussion of the dangers.
Other motivations, however, are also raised, in some respects undermining — or distracting from — that central thesis. They include the assertion — originally detailed in an exhaustive Boston Globe investigative report — that Hernandez was conflicted about his sexuality, with a high school friend and teammate, Dennis SanSoucie, saying (in separate interviews with the programs) that the two had a sexual relationship — something Hernandez was reluctant to admit due to the macho football culture.
Hernandez’s brother, Jonathan, also later spoke about abuse by their father, who died when Aaron was just 16, which later resulted in a rift between Aaron and his mother.
In terms of the presentation, the most illuminating wrinkle in “Killer Inside” involves having access to audio of phone calls Hernandez made from prison, providing modest insight about his post-arrest state of mind and relationships with those closest to him.
For all that, these overlapping documentaries yield an inconclusive portrait. While there’s a tendency to indict football, at every level, for exploiting young talent, there are so many variables baked into Hernandez’s particular tale as to muddy that message.
The Aaron Hernandez story thus remains a tragedy that has defied, and continues to, simple explanation. While documentaries frequently connect their subjects to larger truths, “Aaron Hernandez” and “Killer Inside” ultimately feel at least as preoccupied, to varying degrees, with wading through its smaller tabloid trappings.
“Killer Inside: The Mind of Aaron Hernandez” and “Aaron Hernandez: An ID Murder Mystery” premiere Jan. 15 and Jan. 20, respectively, on Netflix and Investigation Discovery.