Home Culture ‘Bad Boys for Life’ reunites Will Smith and Martin Lawrence with the... 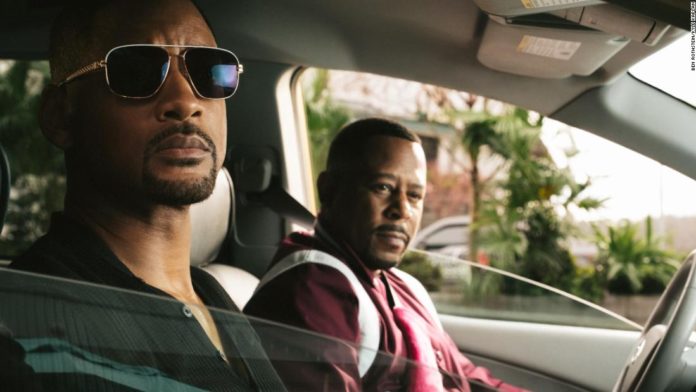 Will Smith’s Mike Lowrey, naturally — a hard-charging super-cop — is reluctant to admit that, but his longtime partner in the Miami police department, Marcus Bennett (Martin Lawrence), becomes a grandpa early on and starts talking seriously about retiring.
A threat from Lowrey’s past, however, arises, in the form of a Mexican cartel leader newly escaped from prison (telenovela star Kate Del Castillo), who dispatches her brutal, vengeance-minded son (Jason Scipio) to execute her plans.
Soon enough, there’s reason for seeking revenge on both sides, but all the collateral damage mostly serves as an excuse for a whole lot of chases and action, some of which drag on interminably.
Granted, action maestro Michael Bay is no longer at the helm (although he does bless the proceedings with a brief cameo), but directing team Adil El Arbi and Bilall Fallah have clearly studied his filmography, which includes blowing stuff up real good.
In a nod to Mike and Marcus advancing toward their arthritic years, they do grudgingly align themselves with a young team of elite cops — unleashing, yes, a flurry of old-man jokes — played by Vanessa Hudgens, “Vikings'” Alexander Ludwig and “The Son is Also a Star’s” Charles Melton.
For all the pyrotechnics, the movie is frankly at its best in the quieter moments — relative and sporadic though they may be — that give the two leads a chance to play off each other, with Lawrence wringing laughs from that squabbling, foul-mouthed banter. (Joe Pantoliano also reprises his role as their perpetually agitated boss.)
“Bad Boys” can never throttle down for long, mindful of its formula. And after Smith’s ill-fated foray in “Gemini Man,” commercially speaking at least, that might be just what the doctor ordered.
The real question is whether the initial kick of seeing the pair reunited will be enough, especially since the movie’s mix of blue skies, comedy and action is hardly a novelty, what with the “Fast & Furious” franchise having pretty well filled that lane.
“Violence is what we do,” Mike tells Marcus, who is experiencing pangs of conscience, in a later exchange.
That might not sound like the most uplifting pastime, but once you’ve committed to another “Bad Boys,” well, whatcha gonna do?
“Bad Boys for Life” premieres Jan. 17 in the US. It’s rated R.

Brian May ‘nearly lost’ his life after heart attack

‘Superbad’ cast to reunite for a virtual party for Democrats

Recording Brain Activity Through the Mouth