As millions of people enter 2020 with a new resolve to slim down, they have a pesky physiological fact to contend with: No matter how much weight they lose, the number of fat cells in their body will likely never actually decrease.

Instead, our fat cells simply shrink in size, lingering in tissues ready to swell again with excess energy. When we lose weight, most of us probably imagine our fat cells disappearing, excised by the “fat burning” exercises or “gut busting” diets we’re using. But Michael Jensen, an obesity researcher at the Mayo Clinic, says anyone hoping to shed pounds should be aware of the way these cells actually react to weight loss.

“For people who lose, say, 20 pounds when they go on their diet after New Years,” he says, “their fat cells haven’t gone away.”

Fat cells’ main function is to hold onto lipids. These fatty molecules are the body’s main choice of energy reserve — each fat cell encapsulates a drop of them. When we lose weight, these liquid fat reserves are drained to fuel the body. But the cell itself remains. In fact, fat cells, or adipocytes, can grow or shrink dramatically, changing in size by up to a factor of 50, Jensen says.

Studies show adipocytes are prone to regaining fat, particularly if that fat is lost rapidly, such as on a crash diet or intense weight loss program. It could be one reason why some studies tracking former contestants on “The Biggest Loser” have found that in the following years, many of them regain much, if not all, of the weight they lost. 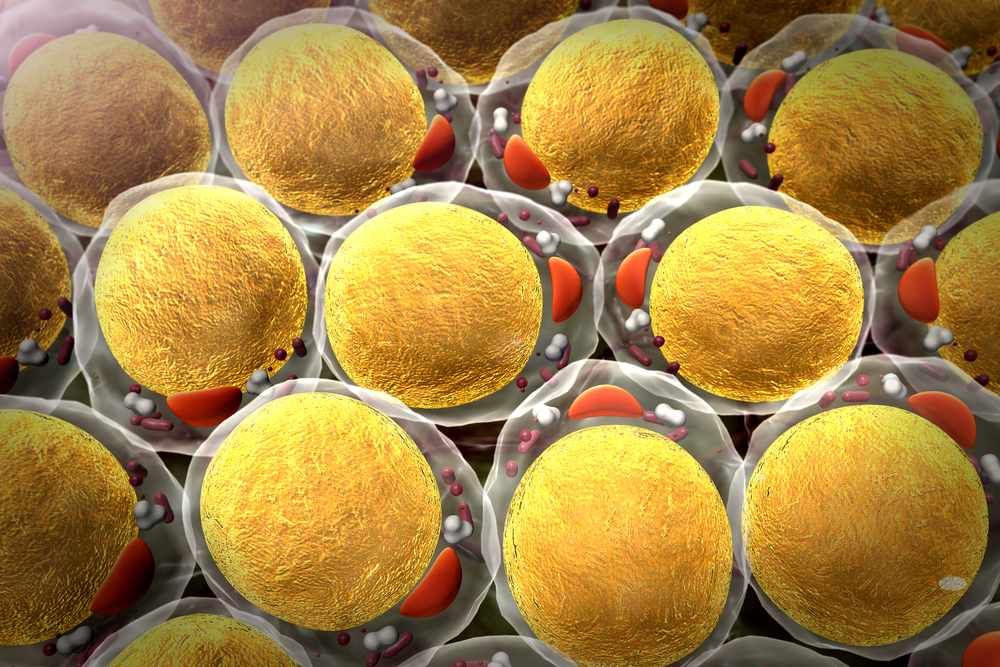 An illustration of fat cells, or adipocytes. The cells contain large drops of lipid, which the body uses when it needs extra energy. (Credit: UGREEN 3S/Shutterstock)

The main suspect behind weight rebounds is the hormone leptin, which regulates appetite. As a person’s weight drops, so do their leptin levels, ramping up appetite. Then, as more food is ingested, the adipocytes restock themselves.

“As they get smaller, those fat cells can rev up their machinery for fat storage,” Jensen says. “So when people do start taking in more fat in their diet, the fat cells are there just ready to grab onto it and store it for you.”

Why would the body make it so easy to pack on weight? Though vilified in recent years, fat cells are a key component in our bodies. As Jensen puts it, “if we didn’t have fat, we would be immobile.”

Fat cells are an excellent vessel for calories, the fuel source for all our bodily processes. The body can hold many more calories in the same amount of fat as it can in either protein or carbohydrates.

Jensen says researchers once believed that fat cell numbers increased only during childhood, stabilizing in early adulthood. This seems to be true for abdominal adipose tissue, the most common subject of obesity studies. But some data show that cell behavior differs by body region, with the number of fat cells in the lower body capable of increasing throughout life.

Like all cells, adipocytes do die. But they’re simply replaced with new ones, at a rate of about 10 percent a year, in a cycle that repeats throughout most of life. Eventually, Jensen says, most people lose the ability to generate new fat cells as they grow older.

Keeping It Off for Good

Gastric bypass and other bariatric surgery procedures — which make changes to the digestive system — help patients to cut their food intake in the long run, holding fat cells to their reduced size and keeping off weight, Jensen says. Liposuction can also physically remove adipocytes from the body. But he notes these are extreme and expensive solutions that most people don’t want, or need, to resort to.

So if we’re stuck with fat cells for life, how can we keep them at a healthy size? Jensen isn’t a fan of the popular conception of dieting that mandates strict adherence. “I’m going to force myself to stay on this diet, no matter what. We’ve all seen how that works — it doesn’t,” he says. Instead, he suggests people pay attention to the triggers that prompt them to overeat, and then eliminate them.

“The more we look at this … a huge amount of our behavior when it comes to eating habits is driven by our environment,” he says.

For example, he says, someone who receives a job promotion that requires less strenuous work will gain weight. Someone in the military on a rationed diet will lose weight. The success stories he’s seen throughout his career have come from people who changed their environment — the foods they have in their home, the restaurants they go to — and thereby their own behavior.

“Then they don’t have to worry about willpower,” Jensen says. “They’ve organized their life so it makes them do what they want to do.”

The story of ‘tsunami boy’ and Ronaldo