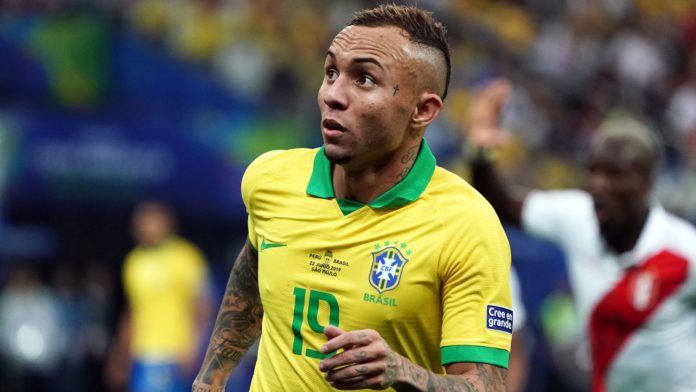 By Vinny O’Connor and Lyall Thomas

Everton are interested in Brazil and Gremio winger Everton.

Gremio’s executive director Klauss Camara has been quoted in Brazilian media stating: “Everton in Everton is a situation that has been coming out more intensely. But there is no proposal put forward.”

Everton is a right-footed winger who can play off either side and was Brazil’s star at their Copa America triumph last summer.

Toffees director of football Marcel Brands admitted at the club’s AGM they are looking to sign a new right winger.

“Because of the new manager coming in, Carlo (Ancelotti) has changed the system a little bit more to 4-4-2,” he said on Tuesday night.

“So that means we have quite a lot of options now in central midfield and a little bit less on the right side in this new system.

While they want to add to their squad, Everton are said to be looking at loan deals this month after confirming record losses at the AGM.

There is a desire to trim the wage bill and Brands also said they cannot spend money on huge transfer fees.