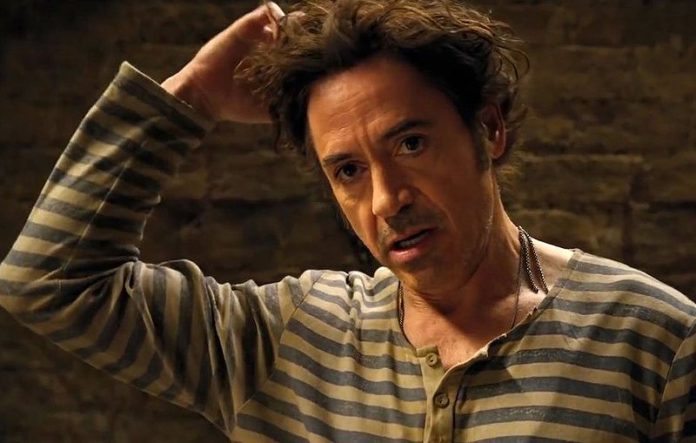 In Victorian-era England, the extraordinary Dr. Dolittle and his wife Lily are gifted a garden sanctuary by the Queen in gratitude of their medical service to both the Queen herself, and the animals around the world they have saved. Assisted by their cadre of wildlife staff, the Dolittle home sees visitors from far and wide, all with their sick, injured, and troubled animals in tow. Life is perfect for the pair, until Lily sets off on her own adventure to discover The Eden Tree; the legendary plant whose fruit is said to be able to cure any ailment known to man. Caught in a terrible storm, Lily’s life is taken by the sea.

Seven years later, the now recluse Dolittle has not seen the outside world for some time. With the sanctuary shut off from outsiders, his life exists only inside the walls of the gates that once were a sign of welcomed comfort for so many. Unkempt hair, a tangled net of a beard not paint the picture of a man who gave up, the instance Lily was gone. Contempt to stay this way for the rest of this life, the status quo is shaken when two children, both with different motives, arrive at the Dolittle estate. One child needs help with a squirrel he accidentally injured, the other, has been sent by the Queen, who is gravely ill. Not keen to help either, Dolittle’s hand is pushed by his faithful macaw, Polly. As it turns out, the deed for his home would revert to the country’s treasury, upon the Queen’s death.

Freshly groomed, and invigorated with life, Dolittle takes charge of the proceedings at Buckingham Palace, much to the dismay of her personal Doctor, Blair Müdfly, whose course of leeches is doing little to bring the Queen back to health. It doesn’t take long for the truth to come out, once Dolittle is able to speak with some helpful friends in a fish tank next to the Queen’s bed; she has been poisoned. The only thing that can save the Queen now? The life saving fruit of The Eden Tree. Dolittle and his gang set out post haste to find the elusive treasure that took Lily’s life.

Dolittle is rated PG (for some action, rude humor and brief language)

Robert Downey Jr.. It’s as simple as that. For someone with as much charisma and poise as Downey, it’s tough to get an undesirable performance from the man. Now that the Iron Man age is behind him, audiences finally get to revel in a performance that is not Tony Stark. Yes, Dolittle as a character is cocky, brash, and a bit standoffish; much like Stark, but this is not Downey playing Downey again. There are subtle differences, along with the broader strokes that paint a different person than what viewers are used to. Even his accent was a bit of a surprise. By now, I’m used to Downey’s English accent and from what I caught in the preview, it seemed like he was going to lean on what he already knew. Instead, he tosses out a more Scottish brogue; and while it may feel a little uneven at times, he doesn’t pour it on thick. Being able to be restraint in these cases is always a positive.

Of course, with all films these days that contain animated characters of any kind, the cast is filled to the brim with popular talent voicing the animal companions of the tale. Some you’ll recognize right off the bat, others that will have you spending an inordinate amount of time trying to identify, instead of enjoying the film and just looking it up afterwards in the credits, or online. The full time comedians stole the show this time though, with enjoyable vocal performances coming from Kumail Nanjiana as the anti-social ostrach, Plimpton, and Jason Mantzoukas playfully inhabiting the mind of a scatterbrained dragonfly by the name of James.

In no way does this means the rest of the cast turned in poor performances or just called in their portion. Octavia Spencer’s duck, Dab-Dab provided moments of silly release and Ralph Fiennes is enjoyable as Barry who fights his depression with anger, much like Peep Show’s Big Mad Andy. There is also plenty to be gleaned from the other live action performers as well. Michael Sheen and Antonio Bandares both bring their special brand of heightened absurdity to their respective characters, and the addition of Jim Broadbent to any film is always a delightful dream; even if he may not be the jolliest of characters this time around. However, for such a large cast of talent, there isn’t enough time to share the love. It’s great to have a big cast and give fans another reason to see Robert Downey Jr. and Tom Holland share the screen again (even if Holland is a CGI dog that wears glasses), but there are simply too many people involved, there is no real focus. Which brings us to…

To put it bluntly, Dolittle is a mess. The film seems to think it can just glide by on the whimsy that is a man who can talk to animals, and it does nothing to actually present a coherent piece of storytelling. Yes, this is a kids film, and sometimes all children need to keep them happy are bright colors, simple jokes, and some clever sight gags. Still, as a filmmaker, you are trying to tell a story, and when all the pieces crumble away at the slightest tap, you have to wonder; what went wrong?

During the writing process, it is obvious they tried to insert every character in the Dr. Dolittle universe into the film, but did not know where to anchor the story. Harry Collett plays Stubbins, the young boy who injured the squirrel, bringing him into contact tieh Dolittle. Much like in the books, he becomes Dolittle’s assistant, but the film presents him in such a manner, that we are to believe Stubbins is the moral crux of the tale. When in reality, he just lucks his way into an adventure and survives. There is no personal growth to the character, he simply gets what he wants. Stubbins certainly is the gateway that Polly uses to get Dolittle to care again, but it’s not Stubbins story, even though we are made to feel it is.

Even though this ends up being a redemption story for the Dolittle character, the movie does little to focus on that. Throughout the film, many of the characters complete their own personal journeys, and while it is great to offer so many pearls of wisdom to a young audience (it’s ok to be scared, friendship is important, don’t poison the Queen of England), there needed to be a more concise delivery method. Instead of focusing so much on Stubbins, they should have chosen one animal, and let that character carry the burden of the morality tale. Chee-Chee the Gorilla would have been better suited as the main focal point, instead of just one of many. Most adults can’t find enough focus to these days to keep their attention on so many different story lines, how will little children fair?

The most egregious error this time around though, is the comedy. Comedy in a kids film is always hard. You want to entertain both young audiences, and the adults who have to take their tykes to the theater too. Dolittle does not find this balance, at all. Sure, it’s funny to me for an octopus to say, “snitches get stitches,” when asked if it saw anything irregular. Then again, hearing the line in a VIctorian-era film that tried to keep its timely nature in place, is odd. Worse even more is the point where Plimpton the ostrich laments, “my father was right, I should have been an omelette.” My lord, even if it flies over the head of every child, it just is not the right look for your family friendly kids film. There are also scenes that look away from what would be gruesome deaths in any other film, but still imply the worst of the situations. Cap all this off with what is basically an enema for a dragon, and you’ve got yourself one strange viewing experience.

Dolittle needed more time in its development stages. At some point along the journey from script to screen, someone needed to stand up and say, “this story needs a lot of work.” There is a definite feeling that everyone thought Robert Downey Jr. and the slathering of quirky, talking animal would be enough of a bandaid to pull the film into the winner’s circle, but instead it finds itself dragging its limp body across the finish line, long after the winners have gone home. Talk about being light for the kids!