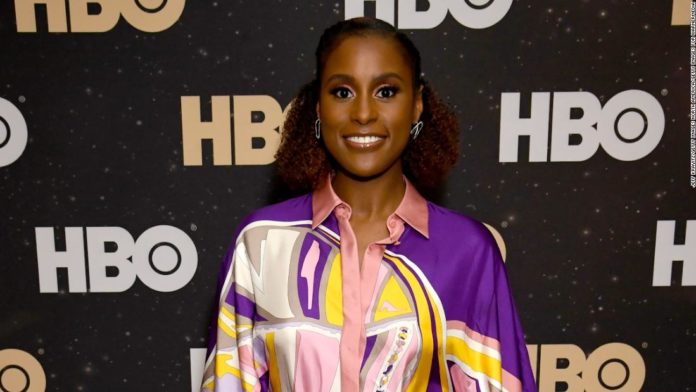 On Monday, the “Insecure” creator and star went viral for delivering a subtle quip that was critical of the all-male nominations for best director.
After reading the nominees — Martin Scorsese (“The Irishman”), Todd Phillips (“Joker”), Sam Mendes (“1917”), Quentin Tarantino (“Once upon a Time… in Hollywood”) and Bong Joon Ho (“Parasite”) — Rae looked into the camera and said, “Congratulations to those men.”
“We were told — Jon Cho and I — to just banter for five seconds as the teleprompter loaded,” she explained on Wednesday at the Television Critics Association press tour in Pasadena. “So that was my banter. I didn’t lie. I said congratulations and there were men there. So, that’s it.”
Those watching the presentation took note the moment and hailed Rae for her quick wit.
Many eyes had been on the category, with particular attention being paid to whether “Little Women” director Greta Gerwig or any other of this year’s notable female directors could score a nomination in the category historically dominated by men.
“I just think it’s unfortunate,” Rae added. “The Academy needs to do better.”
Though, she admitted, “I’m kind of tired of having the same conversation.”
“I think every year, it’s something. So, for me, it’s just pointing it out when I see it. But I just don’t want to get too worked up about it. It is what it is at this point,” she said. “It’s just the conversation that’s happening behind the scenes are what I’m most interested in. So, yeah, I don’t want to say too much more about it. It’s annoying.”
Rae was joined by “Insecure” executive producer Prentice Penny and cast members Yvonne Orji and Jay Ellis on stage.
The group was on hand to promote the upcoming fourth season of “Insecure.” It premieres April 12 on HBO. (The network, like CNN, is owned by WarnerMedia.)