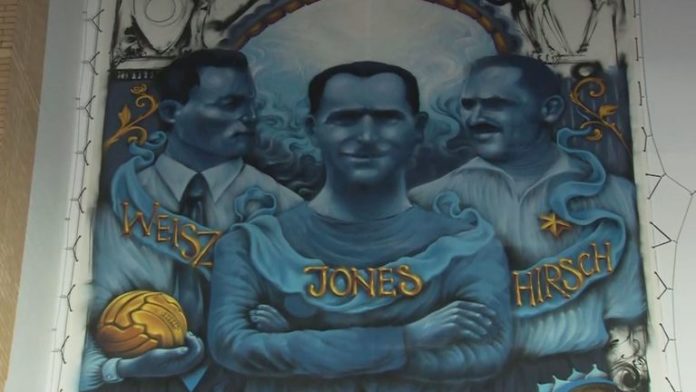 Chelsea have unveiled a commemorative mural of Jewish footballers and British prisoners of war sent to Nazi camps to mark Holocaust Remembrance Day on January 27.

The artwork painted by renowned Israeli and British street artist Solomon Souza is displayed on a wall outside of the West Stand at Stamford Bridge and is part of Chelsea’s Say No to Antisemitism campaign, which is funded by club owner Roman Abramovich.

Chelsea chairman Bruce Buck told the club’s website: “Millions of people were murdered during the Holocaust. As the living memory of the Second World War fades, the more important it becomes to remember the horrors that took place to ensure they are never allowed to happen again.

“This year is the 75th anniversary of the liberation of Auschwitz. Our club, and our club owner Roman Abramovich, believe it is crucially important to honour this anniversary.

“By sharing the images of these three individual football players on our stadium, we hope to inspire future generations to always fight against antisemitism, discrimination and racism, wherever they find it.”

Souza is the grandson of artist FN Souza, whose works have been featured in many museums and galleries in London, including the V&A, British Museum and Tate Modern.

Souza said: “I am delighted to be invited to Chelsea and commissioned by Mr. Abramovich to create this project. My grandmother, Liselotte Souza, escaped the Nazis in 1939 and came to the UK, so this piece means a lot to me and my family.

“Art can be an extremely powerful tool to tell important stories. I hope that my installation at Stamford Bridge will inspire everyone that sees it to challenge and oppose prejudice and hatred in society, at a time when it feels like it’s getting worse.”