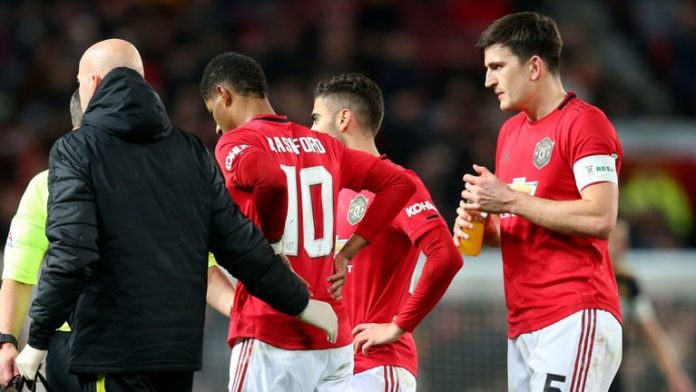 Marcus Rashford was forced off with an injury just 15 minutes after coming on as a substitute, a decision that Ole Gunnar Solskjaer admitted “backfired” ahead of their trip to face Liverpool at Anfield on Sunday, live on Sky Sports.

Mata, who scored the last time United lifted the trophy with a 2-1 final win over Crystal Palace in May 2016, latched onto Anthony Martial’s pass to break the deadlock midway through the second half (67).

United face a trip to either Watford or Tranmere in the fourth round on Sunday January 26.

Man of the match: Juan Mata.

How United progressed at a cost

There were four goals and the old swagger about Manchester United last weekend as they beat Norwich, the Premier League’s bottom side. But in facing Wolves, a team Solskjaer’s side had not beaten since their return to the top flight, this was an entirely different proposition.

United were unable to muster a shot on target in the first meeting 11 days ago, but they nearly found the breakthrough inside three minutes. Juan Mata’s delicate ball over Wolves’ high line released Dan James, but John Ruddy was swiftly out to make a vital touch.

In an open start, the visitors were next to threaten as Adama Traore, who was surprisingly deployed on the left, crossed for Raul Jimenez to twist away from Brandon Williams, but his shot was tame and easily gathered by the returning Sergio Romero.

United were fortunate not to fall behind moments later, however, as after a dreadful attempted cross-field pass from Fred ricocheted off Nemanja Matic, Harry Maguire was second to the loose ball as Jimenez directed it into the path of Pedro Neto, who coolly tucked his shot under Romero.

Why was Neto’s opener ruled out?

The current handball rule states that if a player gains control/possession of the ball after it has touched their hand/arm and then scores, or creates a goal-scoring opportunity then a free-kick will be awarded.

But referee Kevin Friend, with the aid of VAR, ruled out the goal as the Mexico striker had inadvertently handled the ball into Neto’s path. United sought to take full advantage of the reprieve as Mata forced Ruddy into a smart save low to his right after 28 minutes.

Wolves were unperturbed by United’s flickers of danger. They once more came close to breaking the deadlock when Matt Doherty – who had a goal disallowed in the original tie – steered a header from Ruben Neves’ delightful cross onto Romero’s right-hand post, albeit only after the assistant had raised his flag for a fractional offside call.

Ruddy was next to be called into action five minutes before the break as Fred found James with a pinpoint pass over the head of Romain Saiss, but the Welshman was denied by the onrushing stand-in Wolves goalkeeper.

Mason Greenwood started for Manchester United as Marcus Rashford was named among the substitutes. Sergio Romero started in goal ahead of David De Gea while Daniel James came in for Andreas Pereira.

Wolves made one change from the side that drew against Newcastle at the weekend as goalkeeper John Ruddy replaced Rui Patricio.

United had been pedestrian during the opening period, but seven minutes after the restart, there were signs of life as Martial combined with Williams before James escaped Doherty to fire a left-footed shot a yard wide of the far post.

Solskjaer had seen enough as he made a double substitution shortly after the hour mark, with Marcus Rashford and Andreas Pereira replacing the ineffectual Mason Greenwood and James.

United had scored in their previous 17 FA Cup ties at Old Trafford, dating back to their 1-0 defeat to Leeds in 2010, and three minutes later, they extended that run.

This was Wolves’ 38th game of the season, and as their fatigue crept in, United broke their resolve in routine fashion, as Martial collected Maguire’s hopeful ball forward to set Mata on his way. The two-time FA Cup winner held his nerve to lift his shot over Ruddy to end the tie’s 157-minute wait for a goal.

United would hold on, but their victory came at a cost. Rashford landed awkwardly after tangling with Wolves full-back Doherty and was replaced by Jesse Lingard as United avenged their FA Cup exit to Wolves last season.

Manchester United boss Ole Gunnar Solskjaer said: “I didn’t want to play [Rashford]. I think he got a knock from his knee rather than his back and he has been struggling.

“We needed to bring him on, and he was involved in the goal but the decision backfired. We’ll be doing all we can to get him fit for Sunday.”

Wolves boss Nuno Espirito Santo: “I am disappointed to go out. We did well, we played well but we do not go to the next round, which is the only disappointment.”

On Wolves’ disallowed goal, Nuno added: “That’s VAR, that’s VAR. We cannot do anything. The momentum, we celebrate then the other celebration was louder.

“We are celebrating non-goals, it does not make sense.”

Man of the match: Juan Mata

There was very little in truth for the 67,025 who attended to get excited about during a disrupted second half, but Mata took the game by the scruff of its neck to ensure it was United who progressed.

The Spaniard produced a delightful pass to Rashford for his opener against Norwich at the weekend, and having once scored two memorable goals against Liverpool at Anfield, has he timed his return to form to perfection?

Mata has been directly involved in three goals in his last two games for United (one goal, two assists), as many as he was in his first 20 appearances of the 2019-20 season in all competitions before this.

Manchester United will face an away trip to either Tranmere or Watford in the FA Cup fourth round on January 26.

Before that, United travel to face Liverpool on Renault Super Sunday. Coverage starts on Sky Sports Premier League at 4pm; kick-off is at 4.30pm.