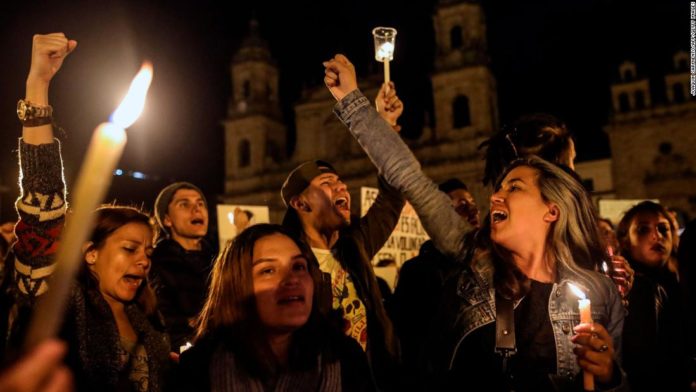 “We are deeply troubled by the staggering number of human rights defenders killed in Colombia during 2019,” agency spokeswoman Maria Hurtado said Tuesday.
There were 107 activists killed in Colombia last year, she said, with 13 other cases under investigation that could bring the total to 120. The year before, the Office of the UN High Commissioner for Human Rights confirmed 115 killings of human rights activists.
“This terrible trend is showing no let-up in 2020, with at least 10 human rights defenders already reportedly killed during the first 13 days of January,” Hurtado said at a briefing in Geneva, Switzerland.
“The vicious and endemic cycle of violence and impunity must stop,” she said. “Victims and their families have a right to justice, truth and reparations.”
The single most targeted group, Hurtado said, was human rights defenders advocating on behalf of community-based and ethnic groups, such as indigenous peoples and Afro-Colombians. The number of female human rights defenders killed has increased “by almost 50 percent in 2019 compared to 2018,” she said.
More than half of the killings were recorded in four provinces — Antioquia, Arauca, Cauca and Caquetá — but killings happened in 25 of Colombia’s 32 provinces, Hurtado said.
The majority of the killings happened in rural areas formally occupied by the Revolutionary Armed Forces of Colombia (FARC), where drug cartels, criminal gangs and newly formed armed groups operate, Hurtado said.
The UN agency called on authorities to investigate each case of violence and prosecute those responsible, “including those aiding and abetting the deadly attacks.”
“The answer of the government should be multidimensional,” Hurtado added.

Colombia’s government under former President Juan Manuel Santos signed a UN-backed peace deal with FARC in 2016 after years of negotiations and half a century of conflict.
The government of President Ivan Duque has come under sharp criticism for not doing enough to contain the violence and support the implementation of the peace plan, such as ensuring adequate security in rural areas, the proper rehabilitation and integration of former FARC members, tackling chronic poverty and providing basic services for residents.
While there has been some progress, Hurtado said the number of deaths shows that more needs to be done.
“We call on the authorities to redouble their efforts to ensure a free and secure environment for civic engagement and to increase the presence of civil State authorities in rural areas to provide basic services, such as health and education,” she said.