Home Sport Back to day job for inspirational Sherrock 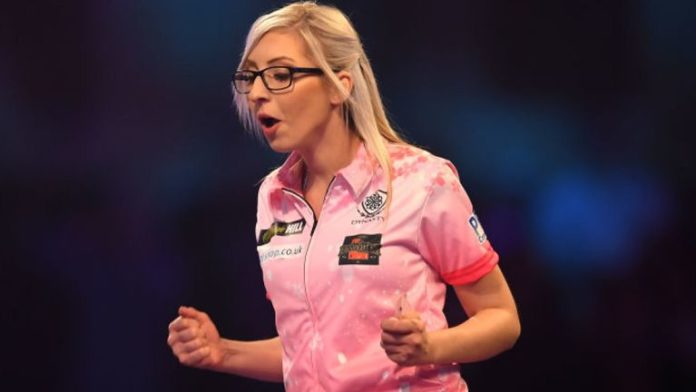 “I never thought that I’d be the one who was inspiring people to take up darts or play in Q-School or anything like that. I’m really proud of myself for that”

After more interviews than she cares to imagine, Fallon Sherrock will this week get back to doing what she does best, playing competitive darts.

Another round of media interviews have been done, with topics ranging from not being able to get a kebab without being recognised, to being a trailblazer for women’s sport.

Another exhibition is in the can too, she teamed up with former Italy international footballer Luca Toni in Germany for an event, having opted against the BDO World Championship, and a couple of new sponsorship deals have been secured.

But darts, and competitive darts, is back on the menu for Sherrock and fortunately, on the eve of a second trip to PDC Q-School, her penultimate chat is with Sky Sports Darts.

“I’ve done loads of interviews now… I’ve lost count! But I’ve enjoyed all of it so I’m happy with it all,” she laughs when asked how many interviews she might have chalked up.

“It’s broken down a barrier, hasn’t it? We’ve been waiting for it and that’s why it’s gone a bit crazy!!

There it is there ….. good job @Fsherrock is on hand ?? pic.twitter.com/YU3QZyg7dV

It’s been a whirlwind few weeks for the 25-year-old single mum who it would not be a stretch to say has changed the face of competitive women’s sport.

By beating Ted Evetts in the first round at Alexandra Palace she became the first woman to win a match in the PDC World Championship, and gained global superstardom overnight.

She followed up by knocking out world No 11 Mensur Suljovic in front of a raucous Ally Pally crowd to reach the third round before bowing out with a battling defeat to Chris Dobey – with the dust now settled – sort of – she is still pinching herself about quite how things panned out.

“I’ve had a little bit of time, so I have had five minutes to myself just to read everything online and it’s sinking in a little bit, but it hasn’t sunk in fully!

“There’s still a bit of disbelief that I’ve done that. After the first win I thought, ‘wow, this is great’. When I had to play Mensur, I thought about not relaxing too much because I still had a job to do.

“I knew that I could do it and I wanted to prove that to everyone, so I went out to try and win and prove that point. I just kept going.

“I’m really happy that I could push Chris. I’m proud because I had to make him play and it proved that we are on a par – women and men – and it’s a level-playing field.”

Having more than held her own, it’s back to the day job for Sherrock who is trying to return to normality, in between the occasional takeaway and putting her young son to bed

“I can’t go for a takeaway without them saying, ‘well done, we saw you in the paper and on the TV’.

“I’m practising how I would normally practise once I get Rory (her son) to bed, I’ll practise and use the same routine as I did before Ally Pally.

“I’m still just doing the same thing and forgetting everything that has happened in the past month.”

She will go up against the men, and more women than have ever entered Q-School before, this week, in unforgiving surroundings.

More than 500 players head to the Robin Park Tennis Centre in Wigan, ranging from former world champions to amateur dreamers, from beaten major finalists to unknown hopefuls, and 20 Tour cards are on offer.

The riches are a two-year chance to earn a living playing darts week-in, week-out, to face Michael van Gerwen, the new world champion Peter Wright and to earn the right to European Tour events.

But for Sherrock it’s just darts.

“It is like back to the day job now. I’ve got the concentrate again, get back out of the clouds and all of that and go back to normality.

PDC Q-School – All you need to know

“Q-School is a level playing field and I’m so excited to be part of that. I haven’t set myself a target because I don’t want to put pressure on myself.

“I’m just going to take each game as it comes and try my best. I’m excited about it because it is all competitive darts, four days and I love doing things that I like as well. I’m going to go into it and enjoy it. I’m really excited.”

With the greatest respect, last year, Sherrock went to Q-School as a virtual unknown. After 5-0 defeats in the first round on day one and day two she chalked up two victories over men on day three, but it wasn’t enough to turn earn her a Tour card.

Twelve months on with two very different, and very high profile, victories over men under her belt, it’s all change for The Queen of the Palace, who heads to Wigan with a target on her back, but also as an inspiration to many.

Former women’s world No 1 Lorraine Winstanley, and BDO-ranked No 4 Dave Parletti both told Sky Sports this week that Sherrock’s exploits at the World Championship inspired them, and Sherrock is only too happy to embrace her new role.

“I feel so proud of myself that I’ve inspired all of these women to even take part in it and that in itself is an achievement.

“I never thought that I’d be the one who was inspiring people to take up darts or play in Q-School or anything like that. I’m really proud of myself for that.”

The worlds was life changing but from a professional point of view this next few days could make her next two years, should she succeed in the brutal environment that is Q-School.

“It feels like a great start. I’m so excited to see what this year holds. I’ve got all of these opportunities coming up and I’m just going to take them all with both hands and go for it. I’m really excited to participate in all of them.”

Also on the horizon is a night in Nottingham in February when she will be one of the nine Premier League ‘challengers’. She’ll be part of all six legs of the Worlds Series too, having been invited to compete.

More opportunities could follow too, but much will depend on how the next four days shake out in Wigan. Reach the semi-finals and win on any of the four days and a Tour card is hers, but equally a solid showing over four days could yield one of 12 cards available via an Order of Merit.

“My targets, if I had to set any, would be to try and win as many games as I can and just to focus on each game as it comes and not put too much pressure on myself.

“That’s what I’m going to do, go into each day and see how it goes and how many games I can win.

“I’ve got a lot of exhibitions, the Premier League and the World Series. That is so exciting for me. I’m not really sure what else there is, I’ve still got stuff coming in every day so it’s really exciting to see what else is going to come throughout the year. I’m really excited.

In north London over Christmas excitement reached fever pitch, with the world watching on again, Sherrock is out to make even more headlines, and once again she will take it all in her stride.