Home World Jeff Bezos is in India. Amazon has a ton on the line 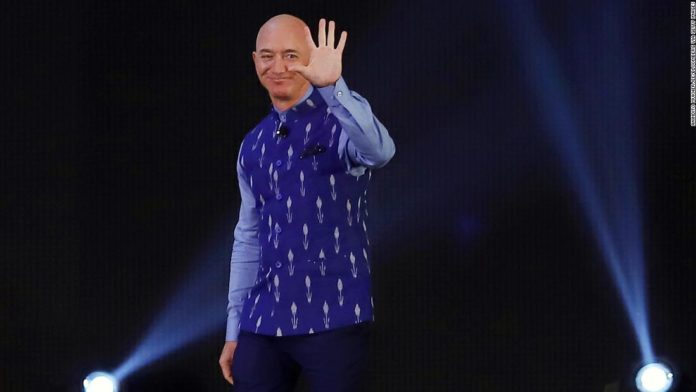 The company plans to pour $1 billion into small businesses in the country over the next five years, CEO Jeff Bezos said Wednesday at a company event in New Delhi.
Amazon wants to help manufacturers, resellers, shops and brands in the country, according to Bezos. More than 550,000 sellers use the Amazon India marketplace, and more than 60,000 Indian manufacturers and brands export products to customers worldwide using the company’s platform.
By helping those businesses, Amazon projects that it can bring more than 10 million local business online by 2025. Bezos also said the investment could help traders export $10 billion in Indian-made goods in the next five years, bolstering Indian Prime Minister Narendra Modi’s campaign to “Make in India.”
Amazon’s $1 billion-dollar pledge is the latest move by the company in its battle for a piece of the vast economy. Amazon has already committed more than $5 billion to growing its business in India.
The Seattle-based e-commerce giant has been locked for years in a fierce battle with Flipkart for dominance in India’s online retail market, which is projected to be worth $200 billion by 2027. The broader retail market is already estimated to be worth more than $670 billion.
Walmart (WMT) bought Flipkart for $16 billion in 2018, and has since retained a leading position in the local e-commerce sector.
Amazon has also been trying to grow its physical presence in the country to fend off rivals. Last week, it announced a deal with Future Retail, an Indian company with an extensive network of stores nationwide. That partnership will make Amazon the official online channel for hundreds of outlets, and also allow customers to pick up products they order on Amazon from its shops.
The company also faces competition from India’s biggest retailer: Reliance Retail, which is owned by India’s richest man, billionaire Mukesh Ambani. Reliance has nearly 11,000 stores across India and sells everything from smartphones to groceries. The company recently launched an online retailer called Jio Mart offering free home delivery for thousands of grocery products, and Ambani has made no secret of his goal of building a business to rival Amazon and Walmart.
Bezos said the new commitment Wednesday was just an “incremental” step in its overall plan for the country.
“We’re committed to being a long-term partner of India. And actions speak louder than words,” he said.
Amazon faces other challenges in India beyond fierce competition.
On Monday, the country’s antitrust regulator opened an investigation into Amazon and Flipkart over allegations that the two retail giants are illegally undercutting local businesses — claims that the firms deny.
The Competition Commission of India is looking into allegations by a New Delhi trade group that Amazon and Flipkart gave preferential treatment to some sellers on their platforms.
Bezos also faced a chilly reception on Wednesday. The Confederation of All India Traders, a large trade organization that represents millions of small brick-and-mortar stores, organized protests across the country against the company and its billionaire founder.
The group told CNN Business that small business owners are being squeezed by deep discounting by companies such as Amazon.
— Rishi Iyengar contributed to this report.