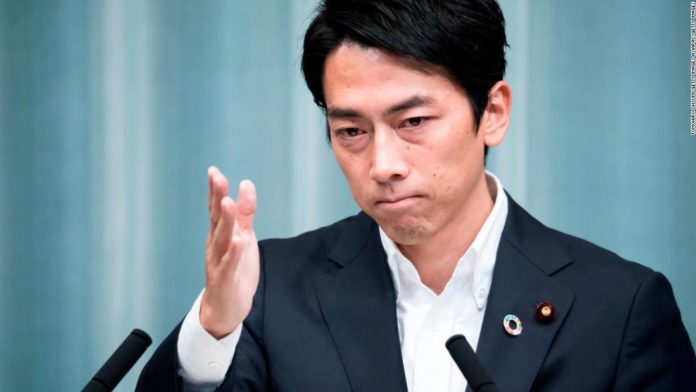 Koizumi, who will become the first cabinet minister in the country to commit to such a move, said Wednesday that he had decided to take two weeks of paternity leave in the first three months after his baby’s birth after considering how caring for their newborn alone could impact his wife.
Although Koizumi, 38, is only taking two weeks off, his decision is significant in Japan despite it having one of the world’s most generous time off allowances for new fathers.
Under Japanese law, both men and women are entitled to up to one year of leave from work after having a child. Parents are not guaranteed pay from their employer, but are eligible for government benefits while off. But in 2018, only 6.16% of men took paternity leave, according to government data released last year.
The move is also notable as Koizumi — the son of former Prime Minister Junichiro Koizumi — is widely seen as a future prime ministerial candidate.
“Honestly speaking, I struggled to work out how I could take a paternity leave, as well as fulfilling my public duty as environment minister,” Koizumi said in a meeting with Environment Ministry staff on Wednesday, according to video from Japanese broadcaster TBS. “But we have to change not only the system, but also the atmosphere.”
“My paternity leave is being reported heavily in the news but I hope that (in the future) we will have a society where a politician’s paternity leave doesn’t make the news.”

Koizumi indicated last year that he was considering taking paternity leave — and at the time, he was met with criticism, said Yumiko Murakami, the head of the Organisation for Economic Co-operation and Development’s (OECD) Tokyo Center.
Generous paternity leave is stipulated by Japanese law, but the country’s work culture means many people still don’t take it up. According to Murakami, Japan hasn’t fully embraced the notion of a work-life balance, and men are not expected to help out at home — and if they do, their loyalty to their workplace is questioned. It’s often difficult for female politicians to take time off as well, she said.
Men often fear that their careers could be impacted if they take paternity leave.
Last year, a Japanese man filed a landmark lawsuit, claiming that his employer, sportswear maker Asics, had purposefully sidelined him from his job in sales and marketing following his return from parental leave in 2015 and 2018. Asics has denied the allegations.
Canadian Glen Wood — who has been living in Japan for around 30 years — told CNN last year that his employer, financial services company Mitsubishi UFJ Morgan Stanley, denied his request for time off as part of his paternity leave. He took time off anyway — but when he returned to his job five months later, Wood claims he was subjected to constant harassment. The company has denied the allegations.
The gender expectations on men also impact women. The most recent World Economic Forum’s annual Global Gender Gap Report found women in Japan spend four times more time than men doing unpaid labor like domestic work and household management — time, effort, and resources that are diverted away from their participation in the workforce or in politics.
Koizumi’s decision is “interesting” as it comes against a backdrop of a falling birth rate, Murakami said. Only three weeks ago, Japan’s Ministry of Health, Labor and Welfare announced that the country had the lowest number of births in 2019 since records began in 1899. The birth rate slipped despite government initiatives to turn the trend around.
In a blog published Wednesday, Koizumi pointed to Japan’s declining birth rate as a reason why men should take advantage of the paternity leave allocation.
“(The falling birth rate) is starting to make people think, ‘OK whatever we’re doing is not really working,'” Murakami said. “It’s starting to make people think, ‘maybe it’s a mindset, maybe it’s the culture, maybe it’s a work environment in which people are not really, truly encouraged to have babies.'”

For now, the reaction from the public has been mixed. Some praised Koizumi’s decision, while others argued that he was not aware of his responsibility as a minister or said that his decision was all a show.
“Koizumi’s leave is short, and people criticize it as only a ‘performance’,” wrote one. “But such ‘performance’ is the first step to change society.”
In an international context, a man taking two weeks of paternity leave could be considered “pathetic,” said Murakami. “It just goes to show how conservative the Japanese society still is, especially in the political space,” she said.
But she hoped that Koizumi’s decision would send a message to the general population, and set a precedent. “(It) lets people know it’s OK to do it,” she said.
“I do think it’s a very symbolic, important announcement,” she said. “It’s very encouraging and hopeful that someone does it in a public way, but at the same time, the flip side is it goes to show you how much work Japan has, how far behind Japan is relative to the rest of the world.”
— CNN’s Chie Kobayashi contributed reporting from Tokyo.