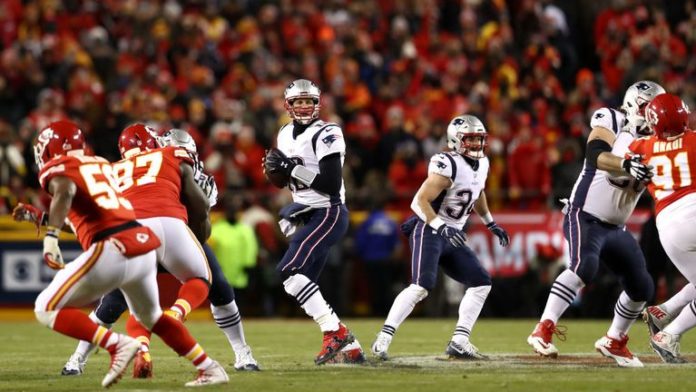 Andy Reid’s Kansas City Chiefs are in the AFC Championship game on Sunday, but his teams have notoriously struggled to get over the line.

‘Big Red’ has the most wins of any coach in NFL history who has not won a Super Bowl. He has taken his teams to the playoffs in 15 of 21 seasons as a head coach. His 27 total playoff games coached put him fourth all time, and his 13 postseason wins are tied for sixth.

The Super Bowl LIV participants will be decided this weekend, with Sky Sports showing both Conference Championship games live.

However, the losses stand out. That Vince Lombardi Trophy still evades him. His 1-5 record in Conference Championship games and one loss in the big game – to Bill Belichick and the New England Patriots in the 2004 season – means six supremely promising seasons have come to devastating ends.

With 14 playoff losses, he’s experienced more January and February disappointment than all but two NFL coaches in NFL history – Don Shula and Tom Landry – and both of those Hall of Famers have multiple championships to fall back on.

Watson vs Mahomes: Just the beginning

Are we witnessing the emergence of the NFL’s next great quarterback duel in Deshaun Watson and Patrick Mahomes?

Yet Reid continues to press on, build outstanding teams and drag them back into contention. With Patrick Mahomes at the helm, he might have the best offense he’s ever coached. The Chiefs are back in the AFC title game for the second straight season and looking to reach the Super Bowl for the first time since 1969.

Can Reid finally get over the hump and deliver Kansas City’s first Super Bowl in 50 years? We take a look back at all of his previous championship games…

Reid’s impressive tenure in Philadelphia got off to a fast start. After going 11-5 in the regular season and 1-1 in the playoffs in his first year in charge, the team had already improved by reaching this stage in year two.

The group was built on defense – they hadn’t allowed more than 21 points all regular season and in postseason wins against the Bucs and Bears, but that came to an end when they met the Rams, in their final season as “The Greatest Show on Turf” with an unstoppable attack.

Philadelphia had a 17-13 halftime lead, but their offense faltered and the Rams kept the ball for over 12 minutes of the third quarter. Marshall Faulk scored two one-yard touchdowns to end the Eagles’ season.

Proving his coaching prowess, Reid had the Eagles right back the next season and this time they were hosts and boasting a 12-4 record, the best in the conference.

Having beaten the Buccaneers in the playoffs in both the prior seasons, the Eagles were favourites at home – in the final game played at Veterans Stadium – to advance to Super Bowl XXXVII. However, the Buccaneers, coached by Jon Gruden, dealt them a crushing defeat.

Quarterback Donovan McNabb’s two lost fumbles and one interception returned for a touchdown by Ronde Barber provided Eagles fans with one of the worst losses in their memory. The Bucs crushed the Oakland Raiders 48-21 two weeks later to rub further salt into the wound.

New year, new stadium, and this was supposed to be ‘the’ year again for Reid’s Eagles. After falling to a 2-3 start, they had their season saved by Brian Westbrook’s 84-yard punt return against the Giants in Week Six with under two minutes remaining, and proceeded to rattle off nine straight wins – including one over the Panthers in Week 13.

They had another miracle in the Divisional Round, with McNabb’s famous ‘fourth and 26’ conversion to Freddy Mitchell as they went on to beat Brett Favre and the Green Bay Packers, and fans finally believed the new stadium might be the difference they needed to get over the line.

However, it was third time unlucky for the Eagles with another monumentally disappointing defeat. McNabb was intercepted four times – three by corner Ricky Manning – and only managed 100 passing yards. The Panthers ran all over Philly for 155 yards as Reid’s team came out flat yet again.

After the three heartbreaking losses, Reid recruited firepower to get his team over the edge (Terrell Owens, Jevon Kearse, Jeremiah Trotter) and they finally did it.

They were the clear best team in the conference at 13-3, with only the Falcons (11-5) coming close to their regular-season record and Philadelphia cruised past the Vikings before welcoming Michael Vick and Atlanta in the NFC Championship game.

In the windy, post-blizzard weather, McNabb was efficient, Westbrook excelled and the defense stifled Vick. Reid had finally ended the ‘curse’, but the underdog Eagles underwhelmed in a Super Bowl XXXIX defeat to Tom Brady, Belichick and the Patriots.

Reid’s clock management was called into question after his team showed no urgency to come back with five minutes remaining, but ultimately McNabb’s three interceptions were costly.

In what was one of Reid’s finest coaching jobs, he rallied his team after a 36-7 road loss that put them at 5-5-1 – in which he benched McNabb – to four wins from their last five, including a 44-6 victory over the rival Dallas Cowboys in a Week 17 ‘win-and-in’ scenario.

They rolled into Minnesota to beat the No 3 seed Vikings, shocked the No 1 seed New York Giants, then faced Kurt Warner, Larry Fitzgerald and the Arizona Cardinals in Phoenix.

The Eagles were poor in the first half, falling behind 24-6 at the break, but Reid rallied his group to take a 25-24 lead in the fourth quarter. However, they again suffered more heartbreak as the Cards drove down the field and took the final lead.

Ten years on from his last appearance, it was all change for Reid. He made the switch from Philly to Missouri in 2013 and immediately turned his team into a contender and one that regularly appeared in the postseason.

Reid took the 2-14 Chiefs to an 11-5 record in his first year in charge, but it was followed by a first-round Wild Card exit. Just like in Philadelphia, he built a roster that dominated in the regular season, but struggled to bring it together in January.

But it was to no avail. In an epic contest, Reid’s team were dominated through three quarters and down 17-7, before scoring 24 points in the fourth as New England added 14 of their own. They were on the wrong end of the coin toss, and watch Brady take his team 75 yards down the field to head to Super Bowl LIII.

What this time for the Chiefs?

With a 12-4 record and home-field advantage against the sixth-seeded Titans, the Reid’s team are favoured to reach Super Bowl LIV in Miami.

Mahomes is coming off a five-touchdown performance last week, and confidence will by sky-high. However, will Reid be able to get the best from this group? Or will his past woes come back to haunt him?

Watch Titans at Chiefs on Sky Sports Action from 7pm on Sunday; kickoff is at 8.05pm.

Following the AFC Championship game, watch the Green Bay Packers at San Francisco 49ers in the NFC Championship; kickoff is at 11.40pm.