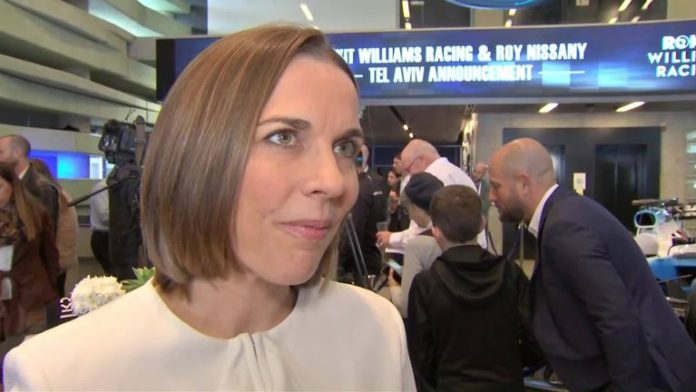 “We can’t get it wrong this year. We’ve got to make progress.”; In conversation with Claire Williams ahead of 2020 season as iconic F1 team bid for return to midfield

By Matt Morlidge in Tel Aviv

Williams say they have set “very ambitious targets” for 2020 as the famous F1 team look to recover after the most disappointing season in their history – and are eager to show just how much progress they’ve made.

The Grove outfit, with nine constructor championships and seven drivers’, are one of the most successful F1 teams of all-time but have endured a desperate two-year slump, consecutively finishing bottom of the standings and scoring only one point in 2019, when they also suffered the embarrassment of missing the first two days of pre-season testing.

Even more worrying for the team was just how far they drifted away from the pack, with George Russell and Robert Kubica regularly 1s-per-lap slower than their closest rivals. That showed how big a task Williams have on their hands to even get back into the midfield, let alone dream of higher.

Can Williams really make such huge strides, so quickly?

“We have been working so hard at Williams and I talk about it so often now, how much work has gone on behind the scenes for the past 14 months,” Claire Williams, deputy team principal, told Sky Sports News at a Tel Aviv event announcing Roy Nissany as a new test driver.

“It’s just frustrating that everyone just sees a Williams at the back of the grid. That work has been done but it hasn’t filtered through to the race track because that takes time.

“We’ve set ourselves some very ambitious targets over the winter from a performance perspective to make sure Williams are in the midfield and fighting again. But while we know from the aero trackers where we are, we don’t know compared to the competition and that’s going to be the most important factor determining our fortunes for the season ahead.

“It’s not going to be until testing or maybe even the first races of the year where we truly understand where we are competitively. But the work has gone in, the work really has gone in over the winter. We’ve just got to work and pray now that the work is going to pay off and give us what I see as just rewards for our efforts.”

Despite being powered by a Mercedes engine which has regularly been one of the best on the grid since 2014, Williams’ package last year meant making the most of that proved impossible.

Williams added to the written media that their work has been around overhauling its structure and processes behind the scenes, as well as focusing on “aero, finding performance, and some mechanical issues.”

“It’s still to me a point of frustration that we’re not able to show everyone the transformation that’s taken place at Williams,” she said. “It’s going to be a journey, we started it last year and I think we started seeing the grass shoots of that over the latter half of the year when we were closing the gap steadily.

“We’ve got to make progress. I believe that we will, but to the level of which we can’t define yet because we don’t know what our competitors are doing.”

What a difference a year makes?

Williams will be hoping for a jump in performance similar to which McLaren have enjoyed. The Woking team, another legendary British F1 outfit, finished ninth in 2017 but last year were up in fourth, securing a podium in the process.

“They had an enormous leap,” Williams admitted.

Although that sort of progress is exactly why she isn’t getting ahead of herself ahead of this year despite what she sees as major positives back in the factory.

“They [rival F1 teams] could have all had an amazing winter and that takes them another ‘x’ tenths ahead,” she added. Still, compared to last year Williams are looking in much better shape.

“One of the first lines of success for us is that we’ve passed all our crash tests and most of which we did at the first attempt, whereas last year even at the sixth attempt we were failing them.

“That [failing] obviously puts even more pressure into the system because then you’re having to deal with a crash test rather than worrying about getting the car out.”

And getting the car out, on February 19 for the first day of testing in Barcelona, is now Williams’ main priority after missing that day last year.

“I have absolute confidence that will happen,” Williams insisted.

Optimism, belief, and why Williams ‘can’t get it wrong’

Williams added that she was “an eternal optimist, a bit like Dad” – the legendary Frank Williams who founded the famous team over 40 years ago and has managed them ever since, even after a near-fatal crash in 1986 which rendered him tetraplegic.

“He was always like ‘it will be fine, whatever happens’,” she explained.

“We’re ever resourceful at Williams, and I have confidence in the work we’ve done.

“I think if we hadn’t have gone to the levels that we went to to transform things last year, I’d be living in blind hope that the car is ready. But we have a much clearer overview of where we are.

“It’s a much more comprehensive picture that we’ve got, and being much more honest where we are. I have much more confidence this year than I probably have done in the past.”

Sweeping rule changes for 2021 means many teams will be keeping an eye on their next car, and even prioritising that rather than the 2020 season when the cars will be continuations from last year’s.

But Williams was adamant: “This year has had to be a real priority. We can’t get it wrong this year.”

Her honesty and belief is admirable, especially after the two years she’s had. Now, it’s almost showtime.

“The waiting is really hard,” she said. “We all want to come out and show that we’ve done a good job and for people to turn round and say, ‘we got it wrong, Williams weren’t on their way out and two years doesn’t define them’.”