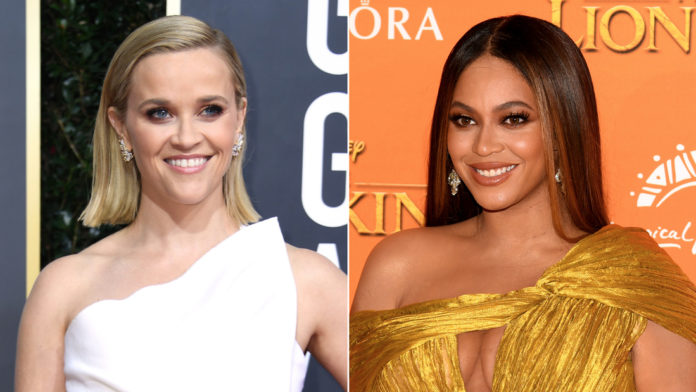 Ever since the actress asked Beyoncé and her husband Jay-Z for some champagne at the recent Golden Globe Awards, the ladies have seemed to be on the path to bff-dom.
Witherspoon posted a video Wednesday on her official Instagram account of her receiving a huge orange box.
After she and her mother Betty tried to figure out what could be in it, Witherspoon unboxed it and began modeling outfits from Beyoncé’s new Adidas x Ivy Park collection as the singer’s hit, “Formation,” played.
“Does this officially make me the newest member of the #Beyhive?” the video caption read. “Thank you, @Beyonce for the #IvyPark swag!”
This gift came on the heels of the flowers and case of Armand de Brignac Ace of Spades champagne — a luxury brand owned by Jay-Z — that Beyoncé and Jay-Z sent Witherspoon after the Golden Globes’ beverage-sharing request.
The world had learned how the awards show dinner table exchange went down after Witherspoon’s “The Morning Show” costar Jennifer Aniston shared it on her Instagram Stories
“Reese!? This is one of the many reasons I love you,” Aniston posted. “We ran out of water at our table so naturally, she asked Jay Z and Beyoncé for a glass of their champagne.”
Witherspoon also shared about the sparkling special delivery on social media, and folks joined in on her excitement.
After her mother expressed that the bubbly was delicious, Witherspoon quipped: “Put her in a commercial.”