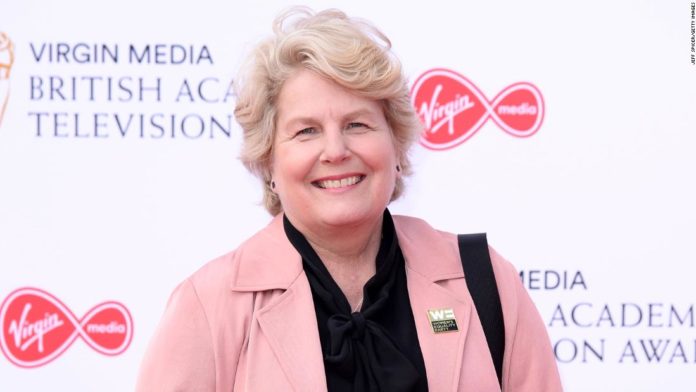 The 61-year-old broadcaster announced her departure Thursday, revealing that she was quitting the hit cooking program, known to US audiences as “The Great British Baking Show,” to focus on other work projects.
In a statement shared on Twitter, she said: “When stepping down from a job it is quite common for people to say they are doing so in order to spend more time with their family.
“Unusually I am departing from the Great British Bake Off so I can spend more time with my other work. As my waistline will testify, Bake Off is an all-consuming show.”
The show confirmed in a statement that they are looking for someone new to join co-presenter Noel Fielding and “Bake Off” judges Paul Hollywood and Prue Leith.
Toksvig continued: “Spending time with Prue, Paul and Noel has been one of the great pleasures of my life. These are friendships which I know will continue beyond the confines of television.”
The Danish-born comedian said the show was a “wonderful” program, adding that it has proven in the past that it can “happily withstand a change of hosting personnel.”
“The reason for that, of course, is that the true stars of the show are the bakers themselves. I wish everyone well,” Toksvig added.
Toksvig, who has appeared on 51 episodes, is not the the first presenter to step away from the UK show.
She joined the series in 2017 alongside comic Fielding when the show severed ties with the BBC and signed a deal to be broadcast on Channel 4. The move prompted original hosts Sue Perkins and Mel Giedroyc to step aside.
Reacting to the news of Toksvig’s departure, Leith tweeted: “I have absolutely loved working with Sandi, she’s been a brilliant host and enormous fun and I am in awe of how hard she works juggling so many different projects.”
Leith added that the pair will be “lifelong friends.”
Fielding said he was feeling “like Tom without Jerry” following Toksvig’s exit, tweeting: “Gonna miss yooooooooooooooooo and the wonderful times we got to play together in the tent! Double acts are (a) rare and magical beast and working with you was a pleasure.”
Ian Katz, Channel 4’s director of programs, said in a statement that Toksvig had been a “huge part of why Bake Off’s move to Channel 4 has been such a success,” adding that “her unique voice will continue to have an important presence on the channel with new shows in development — none of which involve cake.”