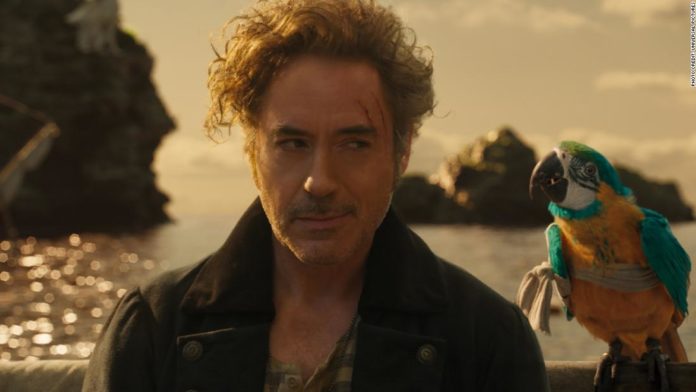 Aside from a few broad bouts of animal humor — yes, flatulence is involved — the whole exercise feels utterly lifeless, and a conspicuous waste of time and, given the special effects, what looks like a ridiculous amount of money.
Lots of well-known actors provide the voices of the various beasts, Michael Sheen plays the cartoonish villain, and Antonio Banderas (fresh off an Oscar nomination, no less) pops in for a cameo, in a scene that seemingly exists strictly to help extend the paper-thin narrative to movie length.
The indifferent nature of the plotting involves basically beginning the story in the middle, with the heartbroken Dr. Dolittle having become a recluse, shunning people after the death of his beloved wife. He resides behind ivied gates in an animal sanctuary hidden within the heart of England, when his reverie is broken by being recruited on a mission to save the ailing queen, requiring a perilous voyage to a mysterious island that’s home to the cure.
A young boy, Stubbins (Harry Collett), comes along for the ride, mostly to provide a set of admiring eyes for Dolittle’s unexplained gift, and not incidentally, someone to whom younger members of the audience might be able to relate. But that merely makes this feel even more like an especially bloated Disney Channel movie, one that substitutes manic activity for creativity.
As noted, good actors lent their voices to the festivities (at least they didn’t have to show their faces), including Rami Malek (as a cowardly gorilla), John Cena (polar bear), Craig Robinson (squirrel), Kumail Nanjiani (ostrich) and Emma Thompson (parrot), the last serving as the sort-of narrator of Dolittle’s story.
Yet everything about the movie — directed by Steven Gaghan, an unlikely choice for this assignment with writing credits that include the gritty “Traffic” and “Syriana” — feels awkwardly glued together, as if an effort was made to add through subtraction by excising scenes that might have provided a semblance of continuity.
The original “Dr. Dolittle,” it’s worth noting — a 1967 musical starring Rex Harrison — was a notorious flop, although a 1998 remake starring Eddie Murphy performed well enough to spawn a sequel. Frankly, those films, hardly masterpieces, look considerably better by comparison.
As for Downey, the actor presumably saw an opportunity to engage in what amount to a lighthearted romp (his mumbling accent falls somewhere in the vicinity of his Sherlock Holmes), but this is an awfully uninspired way of beginning his post-“Avengers” life.
Downey performed opposite plenty of computer-generated characters on Marvel’s behalf, but any similarities end there. Even for ardent animal lovers, “Dolittle” is the kind of misguided dud that’s hard to like, much less love 3,000.
“Dolittle” premieres Jan. 17 in the US. It’s rated PG.