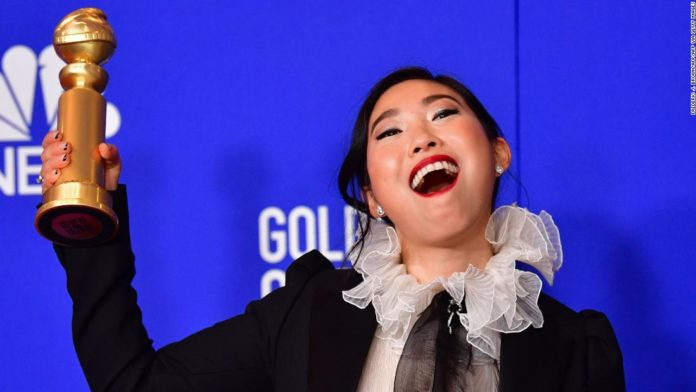 Awkwafina, the professional moniker of Queens native and rising superstar Nora Lum, has taken over conductor duties — or rather, her prerecorded voice has — on the 7 train, surprising and largely delighting commuters packed inside.
It’s all part of a promotional campaign for her upcoming Comedy Central series, “Nora From Queens.” Fittingly, the 7 train runs from Flushing, Queens, to Chelsea, Manhattan.
Her announcements pepper the commute with personality and witticisms, like, “Hey, fellas — stop manspreading!” and “This is Times Square — 42nd Street — where New Yorkers go to relax!”
That’s not to say she doesn’t take the conductor’s job seriously. The rapper-turned-superstar announces train transfers and bus service with equal aplomb.
She’s the very first celebrity to guest-voice announcements on the New York City Subway, Comedy Central said in a statement to CNN. She’ll narrate all 22 stops along the way through Wednesday, when her series is set to premiere.
Awkwafina attracted a following on YouTube with comedic raps about her life as a New Yorker. She crossed over to Hollywood in films like “Ocean’s 8,” “Crazy Rich Asians” and, most recently, the critically acclaimed “The Farewell.”
Comedy Central is already betting on her new series’ success. The network renewed it for a second season ahead of its very first episode.
Also banking on the star are New York transit officials.
“We are exploring new and different ways to generate much needed revenue, while also surprising and delighting customers,” the system’s chief customer officer, Sarah Meyer, said in the statement about the Comedy Central project.
“Our focus will always be to run the trains safely and on time,” she said. “And if a well-known voice can bring attention to in-car messaging, we are all for it.”

CNN’s Mirna Alsharif and Richa Naik contributed to this report.