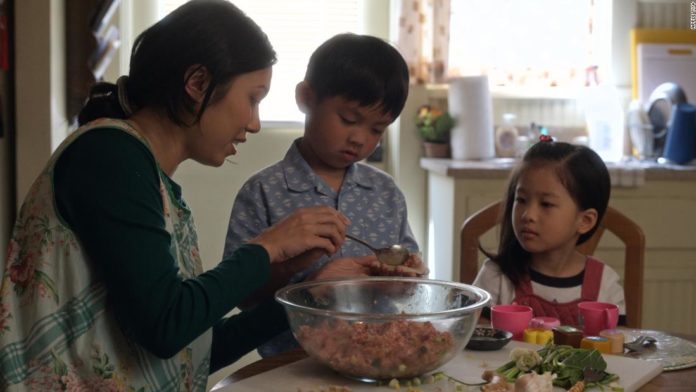 After an uneven start with original series, “Little America” might represent the most unique entry that Apple has delivered, with half-hour episodes that focus on different immigrant stories adapted from true accounts in Epic magazine.
If most premium series these days play like novels for television, “Little America” — developed by “The Big Sick” team of Kumail Nanjiani and Emily V. Gordon, along with Lee Eisenberg (“The Office”) and “Master of None’s” Alan Yang — is basically a haiku. It’s almost like “The Twilight Zone” in terms of covering a great deal of ground concisely, and easily the best of the recent anthologies, including Amazon’s “The Romanoffs” and “Modern Love,” the latter culled from the New York Times.
The eight episodes range from a gay man (Haaz Sleiman) forced to flee Syria amid his family’s disapproval to a Singaporean single mother (Angela Lin) who throws her entire life into her kids. In a near-silent installment, a woman (Melanie Laurent) meets a guy amid self-imposed silence at a meditation retreat; in another, a 12-year-old Spelling Bee champion is forced to grow up on his own after his parents are deported to India.
The subjects vary, but almost without exception the stories are quirky yet resonant, emotional and relatable, with a sweet (or occasionally slightly bittersweet) payoff.
At a moment when immigration has become such a polarizing political issue, “Little America” feels like a tonic, one intended to inspire and unabashedly celebrate people who chose to make America their home.
Apple is clearly seeking to explore social issues with some of its programming, a needle that’s often tough to thread. Given the show’s delicate touch, small wonder the service has already renewed this show for a second season, recognizing the big promise of “Little America.”
“Diary of a Future President,” meanwhile, is a much more basic dish, but still a pretty good one thanks to its appealing ingredients.
The premise essentially dresses up a traditional Disney-style live-action series with a clever hook — namely, unfolding in flashback from the early life of the newly elected Cuban-American president, played (in what amounts to a cameo) by “Jane the Virgin’s” Gina Rodriguez.
The casting requires a certain suspension of disbelief, since Rodriguez still looks young enough (at 35, she’s technically eligible) to make Pete Buttigieg look like an AARP member.
Get past that, and the show has a wonderfully appealing lead in Tess Romero as the young Elena, who begins keeping the diary at age 12 — which is when we meet her — as her widowed mom (“Orange is the New Black’s” Selenis Leyva) is forced to come clean about having a new boyfriend (Michael Weaver).
This being Disney, the narrative — created by Ilana Pena — unfolds from Elena’s perspective, exploring concerns that include broken friendships and talk about peers getting their period, a warning for parents who might not be eager to have that talk.
The basic idea — meeting a future president during a formative stretch, a bit like the 2004 WB network drama “Jack & Bobby” — gives additional weight to Elena’s experiences, which are presented with a breezy charm.
Disney still appears to be figuring out what shows belong in the streaming space as opposed to its linear networks, just as Apple has flailed a bit in seeking to find its identity. In different ways, both of these shows should work for the audiences at which they’re aimed, which, in the streaming game, sounds like a winning ticket.
“Little America” and “Diary of a Future President” premiere Jan. 17 on Apple TV+ and Disney+, respectively.