Four independent analyses of the global climate released today have found 2019 to be the second warmest year on record.

With temperatures 1.8 degrees Fahrenheit (0.98 degrees Celsius) warmer than the 1951 to 1980 mean, the year just finished was second only to 2016 in terms of global warming, according to the analysis by scientists at NASA’s Goddard Institute for Space Studies.

This animation shows how temperatures during each each month of 2019 compared to the 1981-2010 average. It ends with the 2019 annual average. Places that were warmer than average are in shades of red, whereas places that were cooler are colored blue. (Source: NOAA)

NOAA concurred with the ranking, as did the World Meteorological Organization, and Copernicus — the European Union’s Earth observation program. A fourth independent analysis, by the United Kingdom Met Office, ranked 2019 as one of the top three warmest years on record.

Over the long term, 2019 “continued the planet’s long-term warming trend: the past five years have been the warmest of the last 140 years,” according to NASA. As expected, the same has proved to be true of the past ten years.

“The decade that just ended is clearly the warmest decade on record,” said Gavin Schmidt, Director of the NASA institute. “Every decade since the 1960s clearly has been warmer than the one before.” 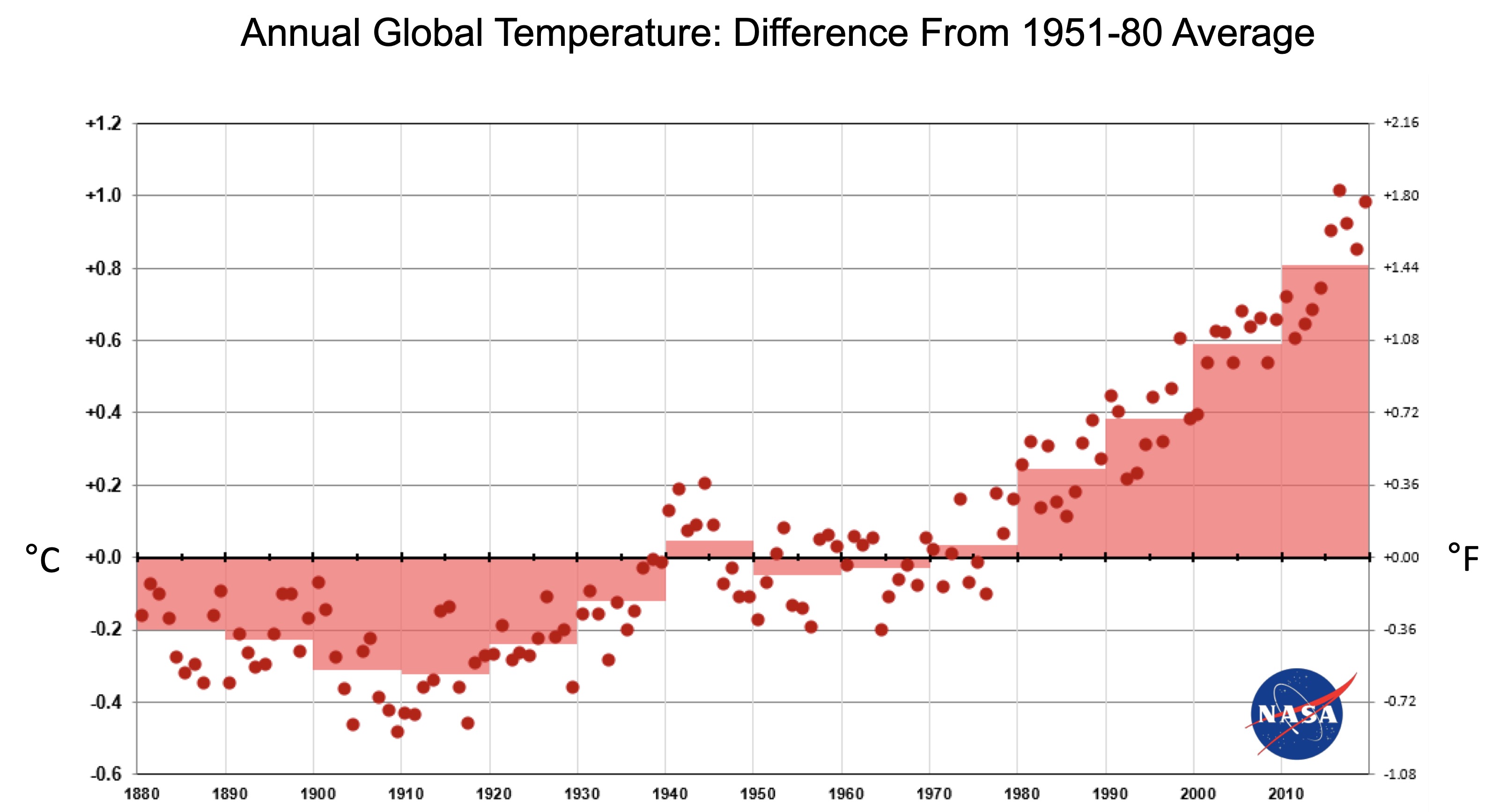 Two views of the long-term global warming trend: The red dots show how global average temperature varied from the 1951-1980 average, culminating in 2019 — the second warmest year in the record. The red blocks show the warming trend in decade-long increments. The past 10 years were the warmest yet. (Source: NOAA/NASA Annual Global Analysis for 2019)

Another unequivocal indication of the global warming trend is that “2019 marks the 43rd consecutive year (since 1977) with global land and ocean temperatures, at least nominally, above the 20th century average,” according to the National Oceanic and Atmospheric Administration’s analysis.

The warming at Earth’s surface also turns out to be just a fraction of the total for the Earth as a whole. That’s because more than 90 percent of the excess warmth caused by our emissions of heat-trapping greenhouse gases has been absorbed by the oceans.

Not surprisingly, this has been causing the amount of heat stored in the oceans to rise. And in another set of findings published this week, a team of 14 researchers from 11 institutes around the world published new results quantifying just how serious that problem has become.

Their analysis shows that in 2019, Earth’s oceans were warmer than they’ve been since the 1950s, which is as far back as reliable records currently go. The past five years have been the warmest for our planet’s oceans since that time. 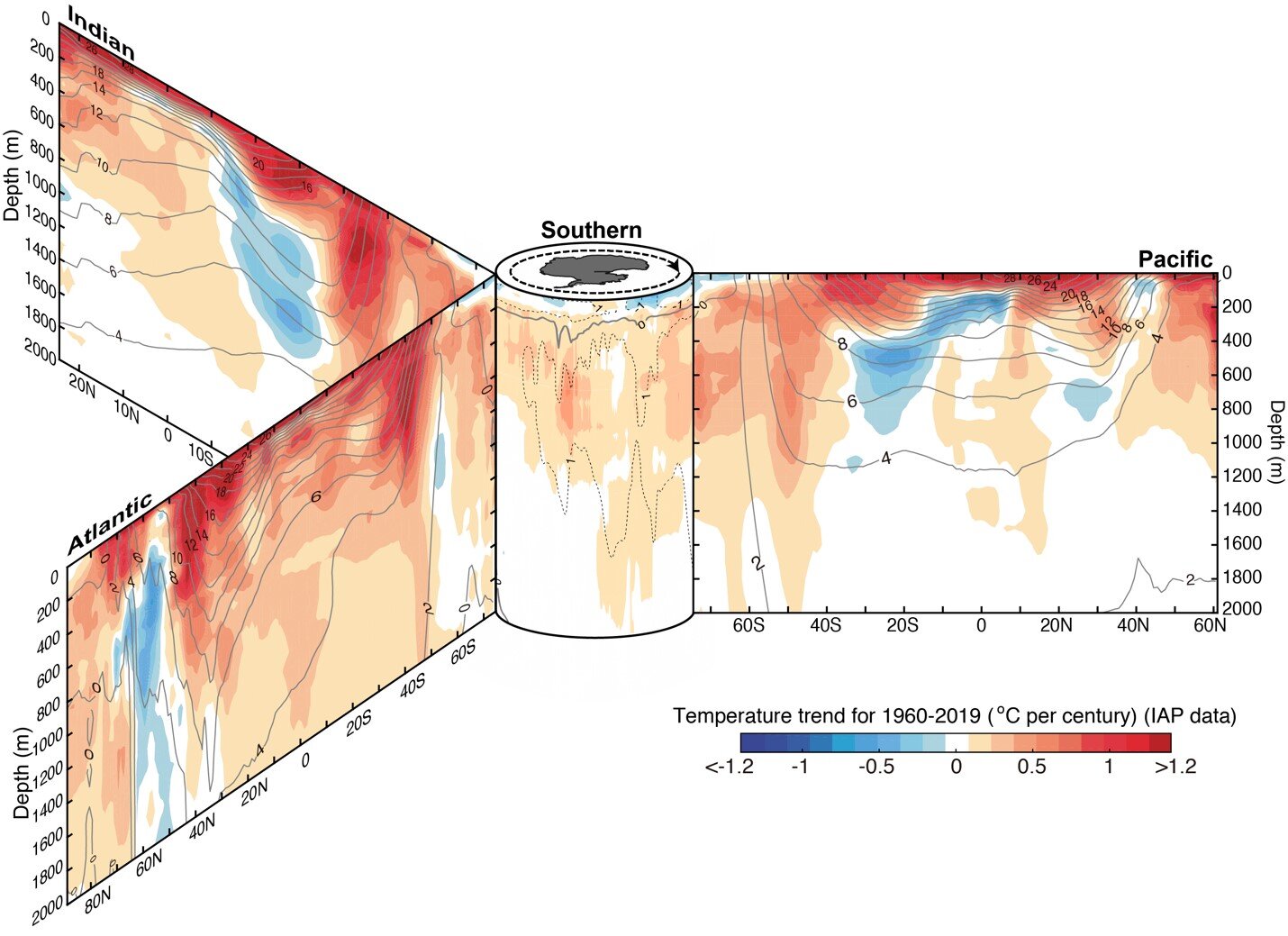 Ocean temperature trends from 1960 to 2019 in the three major ocean basins, seen in cross-section from the surface to 2,000 meters deep. The Southern Ocean is in the center. Black contours show the associated climatological mean temperature with intervals of 2 degrees C. (Source: Lijing Cheng via Phys.org)

The researchers also found that the problem has worsened significantly: Between 1987 and last year, the annual rate of ocean warming was 450 percent greater than during 1955 to 1986.

Ocean warming has contributed to bleaching of coral reefs around the world, and harmed other forms of life in the seas too. It also has been linked to increases in the severity of storms and floods. Moreover, the increasing oceanic heat “is one of the key reasons why the Earth has experienced increasing catastrophic fires in the Amazon, California, and Australia in 2019 (extending into 2020 for Australia),” the authors write in their paper.

And of course, ocean water is expanding as it heats up, contributing to sea level rise.

“Global warming is real, and it’s getting worse,” said John Abraham, a co-author of the ocean study, and a professor of mechanical engineering at the University of St. Thomas. “And this is just the tip of the iceberg for what is to come. Fortunately, we can do something about it: We can use energy more wisely and we can diversify our energy sources. We have the power to reduce this problem.”