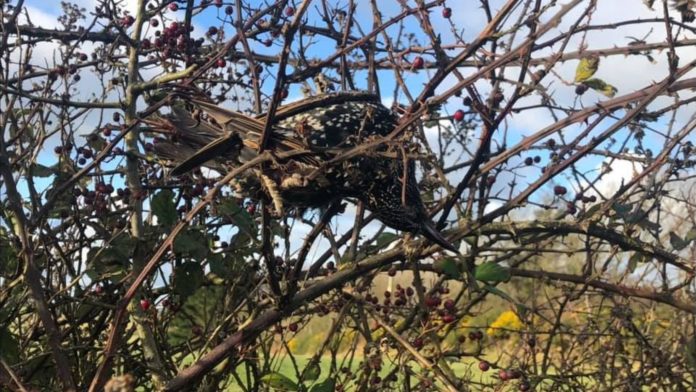 The mystery of hundreds of starlings found dead on a road in Anglesey has been solved by police who think they were avoiding a predator.

More than 200 starlings were found on a road and nearby hedgerow near Llyn Llyweran in Bodedern on 10 December.

Officers from North Wales Police’s rural crime team initially said it was a mystery, but now believe they have cracked the case after some of the birds were examined by the government’s Animal and Plant Health Agency.

Rob Taylor, from the force’s rural crime team, said: “Please bear in mind that the full toxicology has not been received, so a final theory cannot be confirmed, but we are quite sure of the reasons and cause of deaths to the birds.

“The trauma supports the case that the birds died from impact with the road.

“It’s highly likely the murmuration took avoiding action whilst airborne, from possibly a bird of prey, with the rear of the group not pulling up in time and striking the ground.

“We still await toxicology, but from speaking to many people, looking at the injuries and previous worldwide cases, it appears by taking avoiding flight action the murmuration has flown towards the ground and pulled up, but some have not made it.”

He added: “Thank you to the many calls and emails we received on this case from around the world.

“Some theories were truly incredible and out of this world. We can only work on hard evidence, previous cases and professional opinion.”

The starlings were spotted by Hannah Stevens, who was on her way to see a doctor when she initially spotted a huge flock of birds in the sky.

About an hour later, on her way back, she saw them lying dead in the road.

At the time, her partner Dafydd Edwards said: “It was very distressing.

“My gut instinct is that they have been poisoned, but we don’t know. It is hard to say really.”