Home World The irony of Davos VIPs and private jets 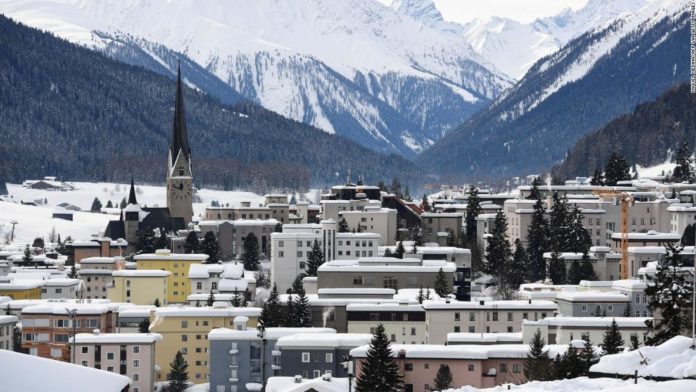 In an era of “flight shaming” and increased public awareness over climate change, the organizers of next week’s event are ratcheting up efforts to reduce the environmental impact of the conference, which draws politicians and CEOs to the Swiss Alps for panel discussions, closed-door meetings and parties. Greta Thunberg, the teenage climate activist known for calling out global leaders, is attending for a second year after she criticized guests at a star-studded luncheon in 2019.
WEF is touting promises to buy carbon credits offsetting flights, a redesigned conference center and a menu packed with locally-sourced food. The fleet of vehicles that will shuttle many dignitaries around the ski resort town is now 88% electric or hybrid.
It’s a mark of mounting pressure on the organization, which has long faced blowback for the environmental footprint of the summit. For some high-profile figures who plan to attend, such as BlackRock CEO Larry Fink, fighting climate change is now an urgent priority. The theme of this year’s meeting is “Stakeholders for a Cohesive and Sustainable World.”
Still, the group’s actions are unlikely to insulate it from critics, who argue that the forum and its attendees are more worried about optics than pursuing systemic change.
WEF acknowledges that because it “brings together stakeholders to help address the greatest ecological crisis of our time,” it eats up resources and causes emissions. In 2020, it’s vowed to become “more sustainable than ever.”
“The Forum is committed to improving the state of the world and this is why sustainability of our 50th Annual Meeting takes on the utmost importance,” Lee Howell, managing director at the World Economic Forum, said in a statement.
Yet ensuring a sustainable conference is no simple task — in large part because of the sheer number of flights required to bring in nearly 3,000 delegates from around the world, to say nothing of their entourages, conference staffers, security personnel and the global media.
Scientists have estimated that roughly 5% of global warming is the result of commercial aviation. Planes spew out carbon dioxide, a greenhouse gas, as well as nitrous oxides, which produce the greenhouse gas ozone. Contrails, ice particles produced by planes that trap radiation, also contribute to global warming.
The issue has led to a strengthening “flight shaming” movement in Europe, known in Thunberg’s native Swedish as “flygskam.” Thunberg, who recently sailed across the Atlantic to attend a UN climate summit, traveled to Davos last year by train, a much cleaner form of transport.
WEF notes that it has offset all flights for accredited attendees to its conference since 2017 by purchasing carbon credits that fund emissions-reducing projects. This year, credits purchased to offset conference emissions will support projects that aim to protect the Amazon from deforestation and convert methane from cow manure in Switzerland into energy.
But Lucy Gilliam, aviation and shipping specialist at Transport & Environment, a European nonprofit that lobbies for clean transport, said there are drawbacks to offset programs, which need to be maintained over time and can take a while to kick in.
“You’re not actually removing the emissions that have been created by that plane,” she said. “The plane will have burned that fuel, and the carbon has been released into the atmosphere.”
The particular rub at Davos, Gilliam said, is that many participating government ministers and top corporate executives opt to take private planes, which produce more emissions per person than commercial flights.
WEF estimates that there were as many as 309 trips last year by private planes to two nearby airports for the conference. That number, which excludes the presidents and prime ministers that tend to land at a nearby military base, was 20% lower than in 2018.
Eymeric Segard, the CEO of LunaJets, says he’s responding to the “flight shaming” movement. His Geneva-based company is pushing clients who want to book a private jet for Davos to opt for smaller, more fuel-efficient planes.
LunaJets is also pledging to offset all trips it books by purchasing carbon credits. That means some trips to the conference could be offset twice — both by LunaJets and WEF.
“[It’s a] very niche clientele that go to Davos,” he said. “When they come from Africa, Asia, the US and India, a train is simply not an option.”
Armed with a webpage outlining its sustainability measures, WEF is prepared for questions.
The group said that last year it had offset 35,000 tons of emissions, funding not only efficient cooking stoves in China, Mali, India and South Africa, but also restoring peatlands in the area that hosts the annual meeting.
In addition to paying to offset all emissions, WEF has refurbished the main conference center where it holds events, installing solar panels and geothermal heating. Paint derived from seaweed has been used to freshen up some rooms. Carpeting on stages will come from renewable sources including “end-of life fishing nets.”
WEF is also eliminating single-use plastics for bags and drinks. “Future Food Wednesday” will feature “a menu that is rich in protein but meat- and fish-free.” And Swiss artificial intelligence company Kitro’s technology will be used to monitor food waste.