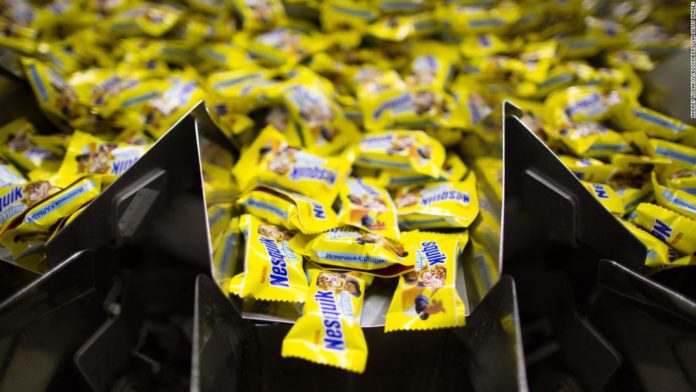 The world’s biggest food company said in a statement Thursday that it would cut costs in other parts of its business to free up more than 1.5 billion Swiss francs ($1.6 billion) to buy 2 million metric tons of recycled plastic between now and 2025.
Nestlé said it would be paying above the market rate for the recycled material, part of its strategy to alleviate a shortage of used plastics suitable for food packaging by luring new suppliers into the business. Doing so should help the company meet its goal of reducing its use of virgin plastics by a third by 2025.
“Making recycled plastics safe for food is an enormous challenge for our industry,” Mark Schneider, chief executive of Nestlé (NSRGF), said in a statement.
“That is why in addition to minimizing plastics use and collecting waste, we want to close the loop and make more plastics infinitely recyclable,” he added.
Sander Defruyt, the expert on plastics at the Ellen MacArthur Foundation, told CNN Business that food companies have a bigger challenge than other consumer firms when it comes to replacing plastic packaging.
That often lends food producers to set lower targets for recycled content, said Defruyt.
The Ellen MacArthur Foundation is a UK charity dedicated to building a “circular economy.” The foundation counts Unilever (UL) and H&M Group (HNNMY) among its partners.
What Nestlé hopes to do is create such an economy for food-grade plastics that would ensure the material never becomes waste. Defruyt said the strategy could stimulate a market that currently barely exists.
Nestlé also announced a $260 million venture fund to invest in start-ups that focus on sustainable packaging. Total spending on the initiatives could reach 2 billion Swiss francs ($2.1 billion), the company said.
“It is encouraging that Nestlé has finally committed to reducing its reliance on virgin plastic,” Matthias Wüthrich senior campaigner at Greenpeace Switzerland said in a statement. “If Nestlé wants to stop polluting the world, it needs to end its reliance on plastic,” he added, urging the company to “eliminate single-use packaging altogether.”

Getting rid of plastics

Nestlé is one of the world’s worst corporate plastic polluters, according to Break Free From Plastic, a global lobby group whose members include Greenpeace and The Sierra Club.
In October, the group named Nestlé, Coca-Cola (COKE) and PepsiCo (PEP) as the top polluting companies for the second year running.
Nestlé’s total plastics packaging usage in 2018 was 1.7 million metric tons, according to the company’s website. Defruyt says only 2% of Nestlé’s plastics packaging is currently recycled.
Its bottled water division, Nestlé Waters, is the largest of its kind in the world, manufacturing the likes of S.Pellegrino, Buxton and Poland Spring across 87 factories worldwide.