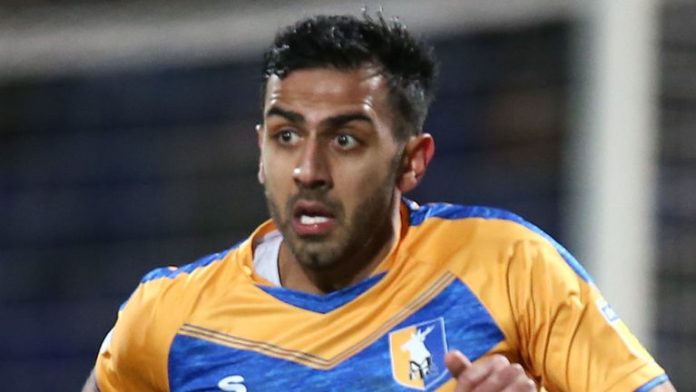 “It made me feel a bit sick when I first saw it. The language that was used was quite disheartening. I was shocked”

Mansfield Town defender Mal Benning says he was left stunned by a racist tweet he received on Monday evening.

Benning earned plaudits across the game for highlighting the online abuse by quoting the tweet with the comment: “Not experienced much ‘racism’ as one of very few Asian players in the professional game. But there is no need for this no matter what race you are or what team you support.”

The 26-year-old is one of just a handful of British Asian players in league football and says he was taken aback by the tweet as has never previously experienced racism as a professional in the game.

“I finished training, went home as everyone does and I just received a Twitter notification and thought it was just general football stuff,” he told Sky Sports News.

“But when I looked at it – a racially abusive tweet – I was quite stunned and taken aback because it is the first time I have experienced it in professional football.

“It made me feel a bit sick when I first saw it. The language that was used was quite disheartening. I was shocked.

“The first thing I did was contact the head of media at Mansfield and asked him what I should do. He gave me the right advice which was to raise awareness about it, which I did.”

‘Support I received was superb’

Asked about the reaction he has received in the days since, Benning said: “It was superb. As everyone knows I tagged the PFA and Kick It Out and both were first class as were the chairman, the manager, the CEO and the fans.

“The players at Mansfield have also been top drawer and made sure I was okay. The support I got from everyone – including other football fans – was superb.”

Benning echoed recent calls from many in the game that social media providers need to do a lot more to regulate their accounts.

“Kick It Out and PFA reported this to Twitter and have been first class regarding it and the tweet was then taken down,” he said.

“I spoke to Jason Lee (the equalities education executive) at the PFA and he made a very valid point regarding Twitter.

“For example, putting your passport number in to make a proper profile, so it’s not these fake profiles that can just tweet you anything they want. I think the way the PFA made that point was very valid.

“I think social media platforms do need to look at that if I am being honest because there are a lot of fake accounts a lot of false identities so anyone can say anything. If identification of the person is made, a lot of it will stop.”

‘Asian players shouldn’t be discouraged by this’

After failed trials at Aston Villa, West Brom and Birmingham, Benning joined Walsall as a youngster and spent three years with the Saddlers after turning professional before joining League Two Mansfield in 2015.

The Birmingham-born left-back, whose parents hail from the North Indian state of Punjab, hopes what happened to him earlier this week does not deter aspiring young Asian players from trying to forge a career in football.

“As one of few Asian players in the game I don’t want this to discourage any young players coming up and thinking I don’t want to go into professional football,” he said.

“This is the minority. It’s still not nice, it’s still abusive obviously, but I don’t want it to discourage them. It’s not as bad as this [all the time] because it is the first time I have experienced it in eight years of football.”