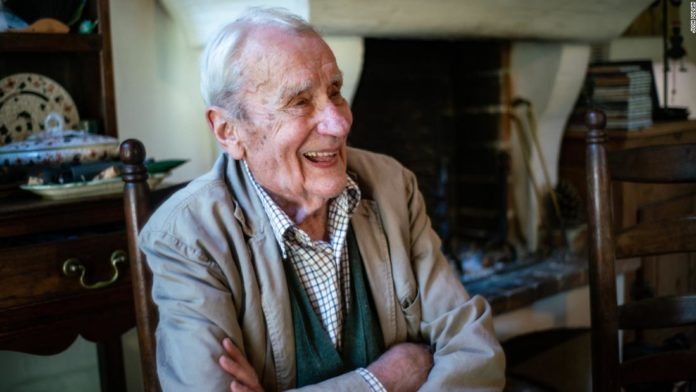 Tolkien was his father’s literary executor, editing much of the author’s work published posthumously after his death in 1973, including “The Silmarillion.”
But many fans will also be familiar with Tolkien’s detailed maps of Middle-earth, the setting of “The Lord of the Rings” series, which readers have referenced over the years as they journeyed alongside the hobbit Frodo Baggins in his quest to destroy the One Ring.
“Christopher’s commitment to his father’s works have seen dozens of publications released, and his own work as an academic in Oxford demonstrates his ability and skill as a scholar,” Tolkien Society Chair Shaun Gunner said in a statement. “We have lost a titan and he will be sorely missed.”
Born in Leeds, England, on November 21, 1924, Christopher Tolkien grew up in Oxford. According to the Tolkien Society, he would go on to join the Royal Air Force during World War II and was stationed in South Africa.
He was an accomplished academic in his own right, per the Tolkien Society, and was a lecturer at the University of Oxford.
But Tolkien was best known as the preeminent expert on his father’s work and the lore that accompanied it.
After his father’s death, Christopher Tolkien began working on his father’s manuscripts and helped publish “The Silmarillion,” which chronicles the origins of Middle-earth and its people. He continued to edit other Tolkien tales as recently as 2018.
“Tolkien studies would never be what it is today without Christopher Tolkien’s contribution,” scholar Dimitra Fimi said in the Tolkien Society’s statement. “From editing ‘The Silmarillion’ to the mammoth task of giving us the ‘History of Middle-earth’ series, he revealed his father’s grand vision of a rich and complex mythology.”
According to publisher HarperCollins, Tolkien edited or oversaw the publication of 24 editions of his father’s works.
“Christopher was a devoted curator of his father’s work and the timeless and ongoing popularity of the world that J.R.R. Tolkien created is a fitting testimony to the decades he spent bringing Middle-earth to generations of readers,” said Charlie Redmayne, chief executive officer of Haper Collins UK. “The most charming of men, and a true gentleman, it was an honor and privilege to know and work with him and our thoughts are with his family at this time.”
The statement said Christopher Tolkien began helping his father at age 5 by listening to bedtime tales and catching inconsistencies. His father also paid him for each mistake he found in “The Hobbit.”