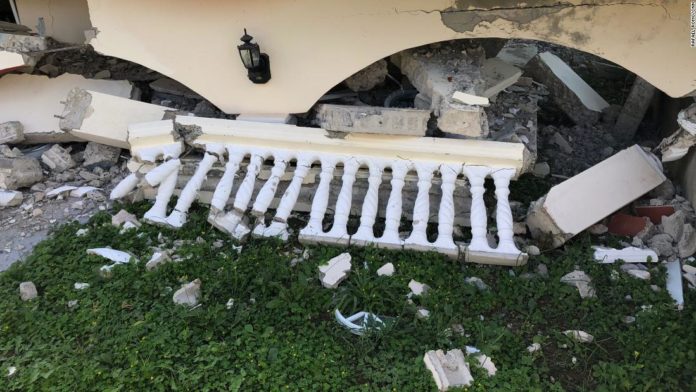 But after a series of tremors and aftershocks that have rattled Puerto Rico’s southern coast since December 28, the tower now sits empty.
Ponce authorities declared it uninhabitable shortly after a mandatory evacuation prompted by a 6.4 magnitude earthquake left cracks and fissures on three sides of the building. Ivette Campos says her elderly aunt was one of those residents who were quickly evacuated.
“They kicked all the residents out as well as people in the doctors’ offices, and nobody truly knows what’s going to happen with the building,” Campos said.
Mayor María E. Meléndez said that there are areas in Ponce that “were severely affected and we estimate the damage to be above $200 million, in addition to the losses sustained by businesses that have had to shut their doors.”
The Ponciana is one of 23 condominium buildings in Ponce that have sustained structural damage, according to Ángel Vázquez Torres, the local emergency management agency’s director.
Vázquez told CNN the same happened with an additional 404 houses in the city.
The fear is that if there’s another major earthquake, some of these structures may collapse, trapping residents or worse.
“Our structural engineers evaluated those sites and indicated to us which ones we had to declare uninhabitable, and we’re trying to keep people away from them,” Vázquez told CNN.
Authorities say there also are countless buildings and houses that may have sustained damage that is not visible during the nearly three weeks of daily tremors and aftershocks that have happened in Ponce and towns located on the island’s southern coast.
The work of detecting the damage in Ponce, Guánica, Guayanilla and Yauco is only beginning.
It’s another great challenge for Puerto Rico, a US territory that has yet to recover from the devastating effects of Hurricanes Irma and Maria, which killed nearly 3,000 in September 2017.
Buildings that had been damaged by the hurricanes simply collapsed or were left in worse shape by the earthquakes and aftershocks. The same happened to other infrastructure, such as roads and bridges.
Deciding what to do next with damaged buildings is still an open question for Puerto Rico. Repairs will be costly and demolishing houses and buildings declared uninhabitable will also cost millions of dollars.
After days of waiting, the island got some good news about funding to begin the recovery process. President Donald Trump on Thursday afternoon approved a declaration of a major disaster in Puerto Rico.
The declaration provides federal funding for six municipalities on the southern coast.
Gov. Wanda Vázquez Garced expressed gratitude. “We thank the @POTUS for his commitment helping relieve the suffering of our fellow citizens.”
Alex Amparo, the top official in the region for the Federal Emergency Management Agency (FEMA), describes the challenge Puerto Rico now faces in military terms.
“We’re in a constant battle, I mean, we’re in a fight right now. The ground is still shaking. I think you saw earlier we had a 5.2 and at the same time we have people who have lost homes,” Amparo said.
While the full extent of the damage continues to be assessed, authorities have to take care of more pressing needs.
There are currently 30 shelters on Puerto Rico’s southern coast, holding 8,023 people who were affected by the earthquakes.
Shelters in the cities of Yauco, Peñuelas, Guánica, Guayanilla and Ponce provide food, showers, air-conditioned rest areas, psychological counseling and medical services.
Some of those displaced are residents who are too afraid to return home for fear a wall or the roof will collapse.
But many others are families whose homes are now in ruins, people who are wondering whether they will receive housing assistance from the government or whether they will have to fend for themselves.
Luis Vélez told CNN that he and his extended family of more than 20 people, including a disabled uncle, have been living at a shelter opened by local authorities at Ponce Vocational School.
“We’re going to stay here until the ground stops shaking,” Vélez said. “We got back on our feet after Hurricane María and, with God’s help, we will do the same after this series of earthquakes is over.”