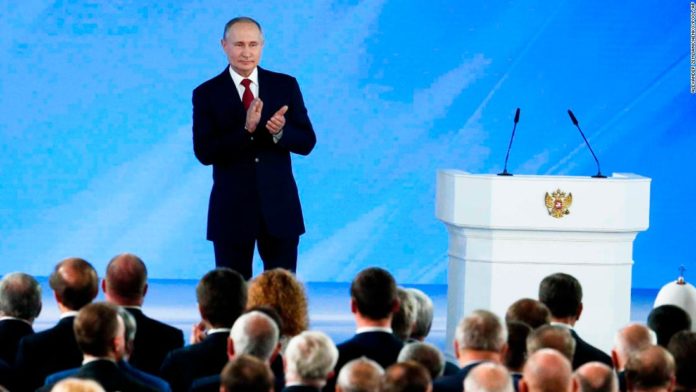 But when Russia’s government announced it was resigning on Wednesday, it took a good 20 minutes for Russia 24, a news channel with close ties to the Kremlin, to break out of its regularly scheduled programming — a discussion about President Vladimir Putin’s proposal for free school meals.
It was a small sign of how pretty much everyone was caught off-guard by the news that Prime Minister Dmitry Medvedev and the rest of the government were stepping down to clear the way for reforms that could see Putin retain his grip on power past the end of his presidential term in 2024.
The resignations appeared to be coordinated with Putin’s proposed changes to the constitution that would strip power from whoever follows him as president and redirect it to other branches of government.
Within hours, Putin revealed that he wanted to replace Medvedev with a little-known tax official named Mikhail Mishustin, who didn’t even have an English-language Wikipedia page on Wednesday morning.
Once state media had caught up, the praise for Putin’s proposals commenced. RT’s editor-in-chief tweeted that several people had called her to say “I did not think that this was Mishustin, because it is too good to be true,” adding that his appointment would be, “in short, everything that we need right now.”
While there was some media skepticism of Putin’s proposals, it was largely confined to independent outlets like Novaya Gazeta, which is known for taking a critical line on Putin and the government. It wrote that the proposed reforms were nothing more than a “smoke screen for the main thing: preserving the existing system and preserving Putin himself at the ‘feeder’.”

‘Waiting for Putin to get tired of work and retire’

The news was also met with a heavy dose of skepticism by some Moscow residents, who told CNN they didn’t believe real change was coming any time soon — a stark contrast to the message playing across most of Russian media.
“It was an absolute surprise for me but I guess every now and then you have to change up the government. I doubt it will bring a change for good. They’ll probably put new faces into power but the general policy won’t change,” said Lyudmila Petrova.
“I don’t know anything about the new candidate for the PM’s position, they just took somebody out of their pocket, I literally don’t know anything about this person, good or bad,” said a man named Igor, who chose not to give his second name.
Wednesday’s extraordinary events came after a difficult stretch for Putin. His approval ratings have fallen among average Russians over the past two years, in part because of the economy struggling and his very unpopular pension reforms.
Russia also saw a string of protests throughout 2019, as citizens became dissatisfied with the lack of independent candidates in municipal elections and the president’s grip on power becoming increasingly tighter.
It’s possible that Putin’s big speech announcing sweeping government reform and the appointment of Mishustin is part of a wider plan to ease the discontent. But analysts say they see the President maintaining his grip on power, one way or another, once his term ends in four years.
“As Russia’s taxman in chief, he’s been in a senior but basically subordinate, technocrat post for a decade — services for which he’s been decorated. This suggests there’s a good chance he’s not going to think independently of Putin,” said Valeriy Akimenko, a long-term Russia analyst currently working for the Conflict Studies Research Centre.
Putin has previously vacated the office of president. From 2008-2012, he was Russia’s prime minister, having served two consecutive terms as president since 2000. Russia’s constitution forbids serving a third consecutive term.
During Putin’s time as prime minister, Medvedev took over as president. While serving, Medvedev extended the length of a presidential term from four years to six. However, Medvedev himself didn’t benefit from this prolongation — Putin did, when he succeeded Medvedev and took over for his third term as president in 2012.
Some in Moscow believe real change won’t come until Putin steps away from the political scene for good.
Evgeny, who asked not to be to be named in full, told CNN that “we’ll have a change only when Putin peacefully retires … therefore, it’s all the same to me. But we all hope for the best and wait for him to get tired of work and quietly retire … and be an honorary. Then we’ll probably have some changes.”