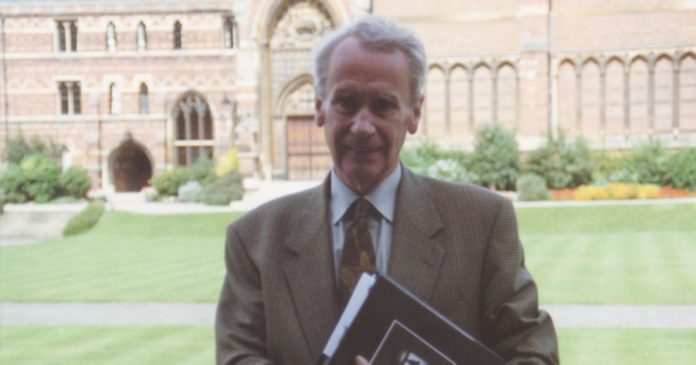 Christopher Tolkien, the son of “The Lord of the Rings” author J. R. R. Tolkien, has died at 95, The Tolkien Society announced on Thursday. Following his father’s death in 1973, Christopher became the literary executor of the Tolkien Estate. He also edited and published the legendary author’s previously unpublished material for decades, including “The Silmarillion” in 1977 and “The Fall of Gondolin” in 2018.

He also contributed to his father’s literary universe in image form through his detailed maps of Middle-Earth, the universe in which the famed “The Lord of the Rings” series is set.

Christopher was born in Leeds, United Kingdom, on November 21, 1924. He was a military veteran, serving in the Royal Air Force during World War II. He later became a lecturer in Old and Middle English, as well as Old Icelandic, at the University of Oxford.

His father was also a professor at Oxford when he wrote “The Hobbit,” which is said to have been based on a story he told his children. So Christopher was likely one of the first to hear a version of the now-beloved 1937 novel.

“Christopher’s commitment to his father’s works have seen dozens of publications released, and his own work as an academic in Oxford demonstrates his ability and skill as a scholar,” wrote Tolkien Society Chair Shaun Gunner in a press release. “We have lost a titan and he will be sorely missed.”

In a second tweet, The Tolkien Society wrote Christopher was “Middle-earth’s first scholar. Namárië.” The word “Namárië” has a dual meaning — as both a greeting and a farewell in Quenya, a language created by J.R.R. Tolkien, CNET reported.

Christopher is survived by his wife, Baillie, and three children, Simon, Adam and Rachel.

Amazon is working on a sprawling and expensive streaming series based on the Second Age of Middle-earth, which comes before the events depicted in The Lord of the Rings, CNET reported. This week, the company announced numerous cast members, including English actor Robert Aramayo. Aramayo played young Ned Stark in HBO’s Game of Thrones, and will star as Beldor, the leading role in the new series.