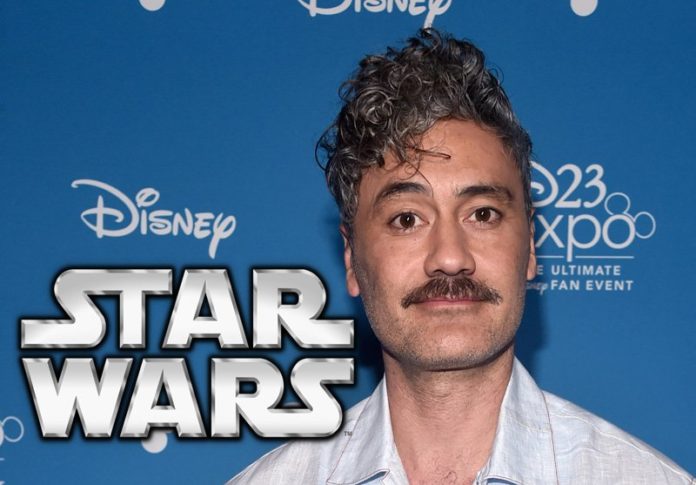 The Hollywood Reporter brings word that Oscar-nominated Jojo Rabbit filmmaker Taika Waititi has been approached to direct a Star Wars movie! However, the outlet notes that it is unclear whether said film will be theatrical or for Disney+. It is also unclear if this is the same project set in a galaxy far far away that Marvel Studios head Kevin Feige is set to produce.

If the Thor: Ragnarok director were to take on the job it would have to be made sometime after he completes post production on his soccer comedy Next Goal Wins and also finishes 2021’s Thor: Love and Thunder for Marvel Studios. He also has a Time Bandits TV series for Apple TV+ in active development, and is attached to the live-action Akira for Warner Bros. and an animated Flash Gordon film for 20th Century Fox.

In 2017, following the firing of both Phil Lord and Chris Miller from Solo and Colin Trevorrow from The Rise of Skywalker, Taika Waititi joked on Twitter about why he would never direct a Star Wars movie…

I’d be fired within a week.


“That particular franchise seems really hard,” Waititi elaborated further to The New York Times that year. “There’s not much room for someone like me. Through its narrow canon, the tone of Star Wars has always been determinedly self-serious, whereas the Marvel movies, like the decades of comics they sprang from, veer wildly from high drama to low comedy. And improvisation has been a tool in every Marvel movie since Robert Downey Jr. riffed his way through Iron Man.”

Of course, he went on to helm the final Season 1 episode of Disney+ Star Wars series The Mandalorian, as well as voicing the robot IG-11. When we spoke to Waititi in October he explained why he ultimately didn’t get fired from that gig.

“I didn’t get fired, I just did whatever Jon Favreau said,” Waititi joked to us. “And no, he wrote such a great whole series, and I don’t know how people can do that. I can barely write one screenplay, you know, without wanting to submerge myself in a river. And he actually wrote all of those episodes and it makes sense -It feels like a good storyline- while making another movie and while we’re shooting it, he’d run off and keep working on ‘Lion King.’ But having also having Dave Filoni, who’s the sort of George Lucas now, and having those two overseeing everything. That was great… I remember one time talking to someone, I was like, ‘Okay, and then you get your blaster out, so like a machine gun blaster.’ And then I see someone nervously on set going, ‘I’m not sure they have machine gun blasters with this. We’ll have to call Dave.’ And we call Dave and it’s like, ‘Dude, did they have machine gun blasters?’ ‘Absolutely not. There were no machine gun blasters in the ‘Star Wars’ universe.’ He knows everything about it, everything.”

In November of last year it was reported that Lucasfilm chief Kathleen Kennedy had a director lined up for the already-scheduled December 16, 2022 Star Wars movie and that they would be announced sometime this month. That scheduled film is also not the one in the frame to potentially be directed by Rian Johnson (The Last Jedi).

Could post-vaccine life mean we return to normal? Not yet

What Poland’s new restrictions on abortion mean for women

Ex-Russian oil tycoon: I was one of the lucky ones

Apple just had a blowout quarter, thanks to iPhone 12 sales

Smart nets and scanners could keep more fish in the sea

British-born man acquitted over journalist’s murder to be released from Pakistan...