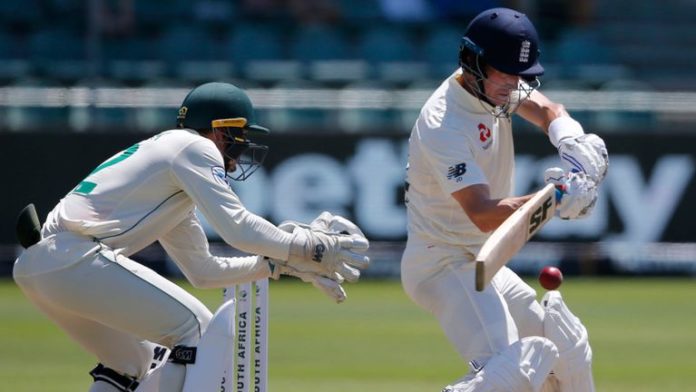 It was an attritional day as the third Test got under way at Port Elizabeth – but should England’s batsmen have shown a little bit more aggression?

For years under Trevor Bayliss, the team was criticised for trying to be too adventurous and taking unnecessary risks with the bat but, on The Cricket Debate, Charles Colvile asked Alec Stewart and Robert Croft whether they went too far the other way on day one at St George’s Park.

Joe Root’s side were 224-4 at stumps on a slow pitch that offered some assistance for South Africa spinner Keshav Maharaj from the outset but did they show too much respect to the South Africa bowlers?

“I thought it was a good, hard day of Test cricket. It wasn’t easy to bat, the pitch was slow. There was spin on day one, which we don’t normally see in South Africa so England will be the happier of the two sides,” said Stewart, on a show you can listen to in the player above or by downloading here.

“Let’s not called it ‘old fashioned’, it’s reading the situation and playing to the situation because when it’s a slow pitch, you’ve got to do all the work, you can’t just use the pace of the ball and deflect it and hit the ball on the up.

“Rates of scoring will be dependent on the surface you play, the size of the outfield and [South Africa] went defensive because they figured out pretty quickly that the ball wasn’t going to carry to slip.”

Croft added: “I quite like the fact you can travel around South Africa and not just see one standard pitch across a four-Test series.

“You go to Centurion where it is zinging past your nose, cracks and it is going up and down, we saw what happened at Cape Town where there was a little bit of nibble and sideways movement and this one is attritional. Then you’re going to go to Johannesburg and it’s probably going to swing around or bounce again.

“It’s a proper test, not only of your technique but your application, your concentration and being able to pull different styles of play out of your bag. There are certain shots on this pitch that you’ve got to put away until [the bowlers] have got a certain amount of overs in their legs and then you capitalise.

“You look at the top three and between them they’ve chewed up the best part of 55 overs, which hopefully gives you that platform for the guys later on. When was the last time you saw the top three for England chew up 55 overs of play?”

However, Croft did argue that the tourists could have shown a little more attacking intent against Maharaj with Denly, in particular, getting bogged down.

“This is where I’m seeing a difference between when I played against Joe and coached teams against Joe, he used to take it on,” he said. “He used to take spin on. You knew once he was facing a spinner, he would be looking to dominate. He seems to have changed his game quite dramatically.

“When any player gets into the Test team, you want them to play the way that got them there. I’m not convinced he is against spin. I think he is restraining himself against spin.”

Stewart agreed that Denly needed to do more against Maharaj but believes it may not be until he has scored a Test century that he feels confident enough to bat with complete freedom.

“He needs to have a safe ‘get off strike’ shot, otherwise they’ll just bowl and bowl and bowl at him which creates pressure so you can keep silly point, short leg and slip in instead of him going ‘bang, one’, the other bloke is on strike, the bowler is not settling and he is getting down the other end of a breather.

“Until he gets that three-figure score, he is still searching to play with the full array of shots.”

Also on The Cricket Debate, Alec and Robert discussed…

Watch day two of the third Test between South Africa and England, live on Sky Sports Cricket from 7.30am on Friday.

When can we go on vacation again? This is what experts...