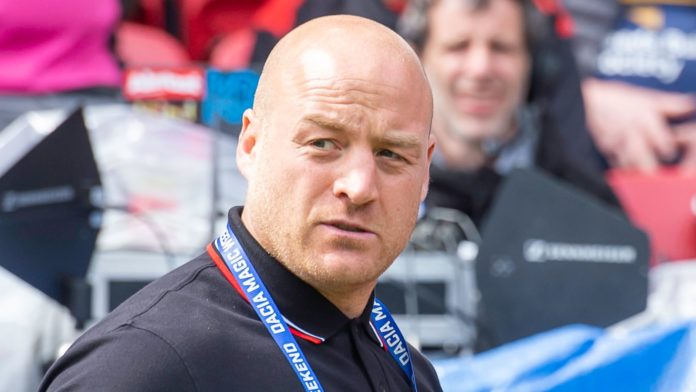 It may have been a forgettable tour in terms of results, but Danny Ward could hardly have enjoyed a more positive experience as part of Great Britain’s coaching staff over the winter.

The London Broncos head coach and his Salford Red Devils counterpart Ian Watson – two of the country’s brightest coaching talents – were selected as assistants to Wayne Bennett as the Lions embarked on their first Southern Hemisphere tour for 23 years.

The stock of Bennett, widely regarded as one of rugby league’s all-time great coaches, may have taken a dip in the eyes of some on these shores after Great Britain lost both Tests against New Zealand, plus the clashes with Tonga and Papua New Guinea.

Yet for Ward, the chance to observe the Australian at work on a day-to-day basis and tap into his knowledge from a 40-plus year career was hugely beneficial for someone entering only his third season in charge of a club.

“It was awesome and an unbelievable experience to go and work with Wayne, who is one of the best in the game, and his staff,” Ward told Sky Sports.

“It’s the same with Watto at Salford, I have a good relationship with him and he’s done a fantastic job over the past couple of years. It was great just to learn off those blokes.

“It’s just watching his day-to-day behaviour, his relationships he has with the players and staff, and how he deals with the external stuff.”

“It’s just watching his day-to-day behaviour, his relationships he has with the players and staff, and how he deals with the external stuff.

“The media criticism the tour came under was tough for everyone and seeing how he reacted was good. He’s just a quality coach.”

The lessons learned from Bennett will undoubtedly serve Ward well as he prepares the Broncos for the 2020 Championship season, where they will be aiming to make an instant return to Super League following relegation last year.

The likes of skipper Jay Pitt, Jordan Abdull and Alex Walker have all moved on, but Toulouse Olympique second-row Rhys Curran, former Castleford Tigers pair Tuoyo Egodo and Cory Aston, and Featherstone Rovers’ Josh Walters are among the new faces at the Ealing-based team this year.

The new-look squad have some stiff tests lined up during pre-season, with Hull FC providing the first match last Sunday and Super League champions St Helens coming up on Saturday as part of former Bronco Louis McCarthy-Scarsbrook’s testimonial.

“You can’t really tell too much from pre-season how your season is going to go, but that’s why we had a good hit-out against Hull on Sunday and Saints this week, so we’ll know where we are after that,” Ward said.

And at the hooter @hullfcofficial run out winners as its a scoreless second half. #LondonCalling pic.twitter.com/wnUOTi6moH

“We couldn’t have picked two better teams, really. I don’t think anyone [in Super League] will be bigger than Hull, physically, this year and Saints were the best team in the competition by a country mile last year.

“They’re two tough challenges for the boys, but that’s the standard they need to chase and set themselves against.”

Also joining the senior squad for 2020 are academy graduates Rian Horsman and Oli Leyland, with the team at Ward’s disposal made up of around 60 per cent homegrown players, including new captain Will Lovell.

The Dewsbury-born head coach is eager for his side to have a strong London contingent, which he hopes can be at the forefront of the Broncos not only returning to Super League but once again becoming an established top-flight presence.

“That’s my goal and I want London to be one of the best teams in Super League,” Ward said. “I’m not saying that’s going to happen next year or the year after, it’s a long-term plan.

“But if you haven’t got that goal where you want to be one of the best teams in the game then what are you here for?”