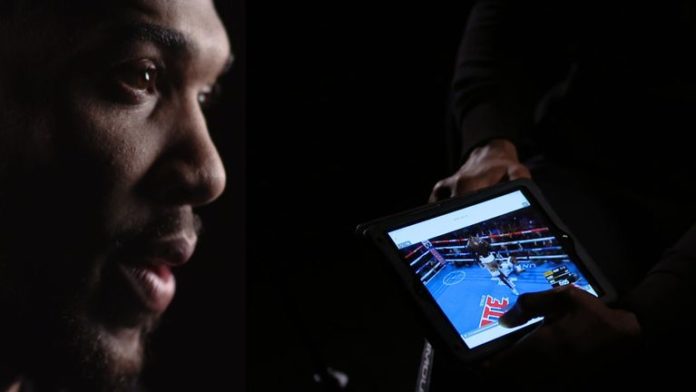 Oleksandr Usyk’s promoter has held “interesting talks” with Anthony Joshua and Eddie Hearn in London ahead of a potential 2020 heavyweight bout.

Alexander Krassyuk, who now works alongside Hearn, revealed details of the meeting on social media on Thursday.

Krassyuk had previously told Sky Sports that Usyk’s desired world heavyweight championship fight against Joshua occurring this year “is a fact” but he must first decide whether to face Derek Chisora or Joseph Parker beforehand.

Joshua has two mandatory challengers snapping at his heels – Usyk (WBO) and Kubrat Pulev (IBF). Since Joshua regained his belts from Andy Ruiz Jr last month, Pulev has been leading the race to be his next opponent for a UK homecoming fight.

Usyk’s team have conceded that they will likely have to be patient but have the option to first meet Chisora in a non-title fight or face Parker if the WBO title becomes vacant.

Chisora’s manager David Haye had been lobbying for an opportunity at the WBO title with the governing body if it becomes vacant due to Joshua’s decision to instead face IBF mandatory challenger Pulev.

Haye told Sky Sports last year: “It makes sense for them to sanction Chisora vs Usyk.”

Usyk still might decide to take on Chisora, with promoter Hearn confirming that March 28 at The O2 is pencilled in, if the WBO belt remains in Joshua’s hands.

“In case it turns out that the WBO title is vacant, Usyk will be happy to fight for it,” Krassyuk explained. “And Joseph Parker is the highest available contender.”

Parker’s manager David Higgins previously told Sky Sports: “You could end up with a situation where you have Usyk fight Parker for the vacant title, which funnily enough is how Joseph became world champion. He fought Andy Ruiz Jr for the vacant title. History repeats.”

Joshua does not want to vacate or be stripped of the WBO title but told Sky Sports: “If I have to, I’ll give it away – but I’ll get it back again.”

Undefeated Ukrainian Usyk remains adamant that his long-held dream of facing Joshua in a world title fight will be realised in 2020, whether he enters as a mandatory challenger or as the winner of the vacant WBO belt.

Usyk won an Olympic gold medal at London 2012 alongside Joshua and has since become the undisputed cruiserweight champion, before stepping up to heavyweight and trying to become only the third boxer ever to win a belt in both divisions.

“Usyk will fight Joshua and this is a fact! The question is whether it happens in the next fight or the other,” Krassyuk said.

“At this stage we [wait] for AJ’s decision.”

The IBF first told Sky Sports last year that they expected their mandatory challenger, Pulev, to get the nod over the WBO’s Usyk for the first challenge of 2020.

And earlier this week the IBF updated: “Pulev and Joshua camps have asked until January 31 to negotiate.”

Bulgaria’s Pulev, 38, has lost just once in 29 fights – against then-champion Wladimir Klitschko five years ago. He has since beaten Chisora and Hughie Fury.

Promoter Hearn told Sky Sports about Joshua’s plans for the year: “Conversations are ongoing with all parties to plan what’s next and it will really come to a head over the next few weeks.

“Right now everything is in play.”

Meanwhile, Deontay Wilder will defend the WBC heavyweight title in a rematch against Tyson Fury on February 22 with a third fight between them already considered for later in the year.

Dillian Whyte and Alexander Povetkin have both registered “interest” in fighting each other in April.

And Ruiz Jr is considered a return in late spring, according to his trainer Manny Robles, who doesn’t know if their working relationship will continue after a demotivated preparation for the Joshua rematch.

‘European Tour not in financial difficulty’