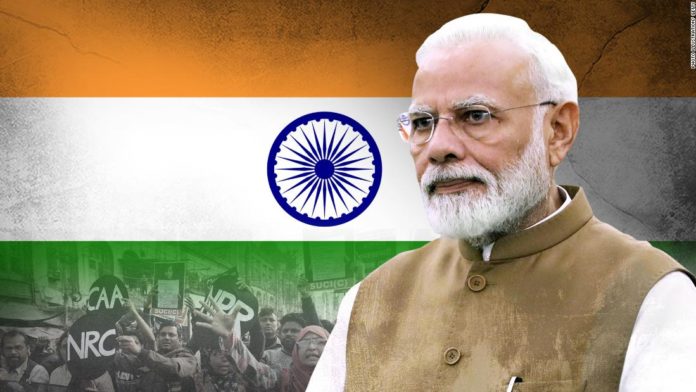 His incumbent Hindu nationalist Bharatiya Janata Party (BJP) won a general election by a landslide in May, increasing its share of the vote on its impressive 2014 win.
Now, he’s facing the biggest challenge yet to his political supremacy.
Over the past few weeks, protesters across India have taken to the streets to oppose a new citizenship law that they say discriminates against Muslims. Demonstrations have continued, despite official bans on public gatherings and the risk of violence, which has already cost the lives of more than 20 protesters.
But neither Modi — nor the protesters — show any sign of backing down. Speaking at a rally in New Delhi in December, the Prime Minister said the controversial Citizenship Amendment Act (CAA), which came into effect on Friday, had “nothing to do with the Muslims of the soil of India.”
The CAA is only the latest move in a series of steps Modi has taken as part of his agenda to promote Hindu nationalism in secular India. And while Modi’s BJP still has plenty of popular support, some analysts warn that in the long run, these divisive moves could end up costing him. v

The danger for Modi

Modi has made no secret about being a Hindu nationalist — and last year he made several moves to further that agenda.
In the months since he was reelected, Modi has split the former state of Jammu and Kashmir into two union territories, a move that gives the government in New Delhi greater control over the disputed Muslim-majority region.
His government has also published a new National Register of Citizens, which excludes 1.9 million of northeastern Assam state’s 33 million population.
The register’s supporters say it will help root out undocumented Bangladeshi immigrants, but critics fear it will lead to the deportation of Assam’s hundreds of thousands of Bengali-speaking Muslims, with claims to legal residency.
There are also concerns that the register will be used to justify religious discrimination against Muslims in the state.
But it was only when Modi passed the CAA in December that protesters took to the streets across the country in their thousands.
The controversial CAA promises to fast-track Indian citizenship for religious minorities from the three neighboring Muslim-majority countries of Pakistan, Bangladesh and Afghanistan — but not if they are Muslim. Critics say the law threatens India’s secular foundations by marginalizing its 200 million Muslim minority population.
It’s difficult to tell how unpopular these policies are — although there have been numerous protests, there is no regular polling in India, where nearly 80% of the population are Hindu.
But one thing is for sure: over the past year, the BJP’s political footprint has shrunk. At its peak in 2018, the BJP ruled 21 of the country’s 29 states, either alone or with allies. After a series of blows in recent state elections, the BJP has been left with 15 states under its control.
Most recently, the BJP lost the eastern state of Jharkhand last month to a regional party-led alliance that includes the Indian National Congress, the country’s main opposition party.
“With this mandate, the people have defeated BJP’s attempts to divide the society on caste and religious lines,” Congress party president Sonia Gandhi said in a statement.
There’s more to the BJP’s recent losses than growing discontent over their religious policies. According to Jyoti Malhotra, editor of national and strategic affairs at Indian digital news platform The Print, voters are frustrated with Modi prioritizing other policies over the economy.
Modi’s resounding victory in 2014 came on the back of grand plans for the economy. He managed to secure a second term despite the economy growing at its slowest pace in six years, and rising unemployment. India’s current unemployment rate sits at 7.6% — up from 6.9% in January last year.
And people aren’t happy. On January 8, thousands of workers linked to national trade unions took part in strikes across the country in protest against privatization and the impact of the economic slowdown on jobs.
A day earlier, the government cut its growth forecast for this financial year to 5% — the slowest pace in 11 years — which it blamed on lower demand and private investment.
“What’s happened in the last five years is (Indians) kept giving Modi the benefit of the doubt,” Malhotra said.
Opposition parties had won recent regional elections as the economy was in poor shape — and Modi’s BJP hadn’t met voters’ expectations by increasing jobs, she said.
In his first term, Modi brought in a ban on 86% of all cash in circulation, and implemented a nationwide goods and services tax (GST) that replaced a web of local tariffs, uniting the country’s 28 states into a single market for the first time.
The GST was expected to boost growth, but many economists were skeptical given the time it would take businesses to get used to the new system and for more people to come under the tax net.
“People aren’t doing well and since demonetization and the badly implemented GST, which had such a big impact, things are not getting better,” Malhotra said. “That’s really the key and what feeds into the voting in the state elections.”

For now, Modi’s party is only losing ground at the state elections. But the protests — and the growing dissatisfaction over the economy — could end up having broader effects.
Gilles Verniers, assistant professor of political science at India’s Ashoka University, expects that over the next few months and years, there will be more confrontations between Modi’s central government and state governments — especially those governed by opposition parties.
He expects Modi to use several different tools to “leverage states into submission,” such as imposing Section 144 — which prevents gatherings of four or more people — as he did in response to protests in December. He could also shut down the internet, a tactic India employed over a hundred times in 2019 — more often than any other country — according to the Internet shutdown tracker. That includes an ongoing blackout in Kashmir that began on August 4, 2019.
But doing so could further tarnish the country’s reputation as the world’s biggest democracy.
India is moving in a more authoritarian direction at precisely the moment international partners and investors would expect the government to concentrate on the economy, Verniers said. “This moment is disastrous for India,” he added.
As for whether Modi’s nationalist agenda will ultimately cost him a third term, it’s too early to tell. Modi still has four more years left of his second term — and for now, opposition parties aren’t putting up a cohesive fight, says Malhotra.
She believes if Modi wants to succeed, he’ll need to focus on the economy, not politicize religion.
But Verniers doesn’t think it’s likely Modi will cast aside his divisive policies.
“My sense is that the government is going to stick to its guns because these are not policies meant to produce an electoral advantage, these are policies for the BJP that are doctrinal and at the heart of what they believe in,” Verniers told CNN.
“The more the BJP focuses on those core doctrinal symbolic policies, the less it’s perceived to be caring for the economy, which shows no sign of recovery,” he said.
But Modi’s success or failure over the next few years will still depend on how well his opponents — both protesters and politicians — can organize themselves.
“I think if somebody does take charge, if a political party takes ownership, then this could have a bigger impact. Remember, the most important fact is the economy,” said Verniers. “If the economy continues to do badly, then I think the Prime Minister and the country is in trouble.”