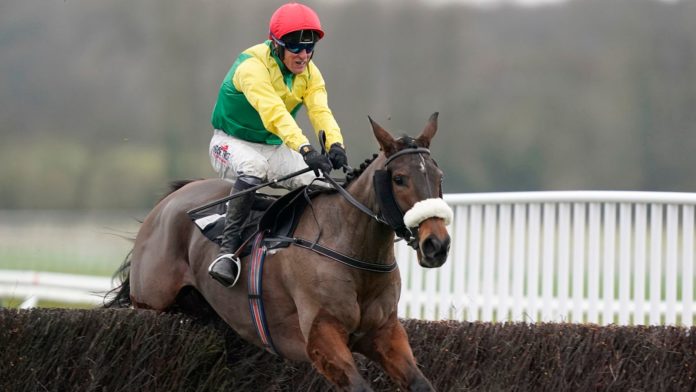 Jessica Harrington reports Magic Of Light to be in fine shape as she bids to repeat last year’s success in the bet365 Mares’ Hurdle at Ascot on Saturday.

Magic Of Light took this prize on the way to finishing second in the Grand National behind Tiger Roll.

The nine-year-old arrives in good heart after enjoying a bloodless victory by 99 lengths over fences at Newbury last month.

“She’s there and is settled in,” said Harrington.

“She’s probably up against it a bit more this year than last year and a little bit different ground.

“She’s in great order. She loves that trip.”

Her main rival could be Oliver Sherwood’s Papagana, who took third place in the Grade One Marsh Hurdle at Ascot on her latest start after landing a Listed contest at Kempton when Culture De Sivola was second.

“It was the obvious target after the Long Walk (registered name of the Marsh) – going back against her own sex. If she produces that form, she’s got to go very close,” Sherwood told Sky Sports Racing.

“To be quite honest, when Paisley Park came out (at Ascot), I thought she’d take a lot of beating, so I was a tad disappointed straight after the race. Having said that, I would have taken finishing third in the Long Walk at the beginning of the season.

“She’s run all the way to the line and looking back at it, I was pleased. I was probably expecting a bit too much beforehand as it’s a different ball game taking on the boys in Grade One company.

“She’s back in her own league on Saturday. The ground is going to be pretty soft and tiring, which she’s handled before, and I see no reason why she can’t do it again.

“She’s going there with a live chance.”

Noel Williams switches Sensulano back to hurdles for the first time this season after winning her last two races over fences.

“It’s a race for her that fitted in. We’ve wanted to step her up to three miles, so I’m hoping that will help and mitigate the fact we’re dropping down to hurdles, but she seems in great order,” said the Blewbury handler.

“It’s a Grade Two mares’ race so it looks competitive, but I’d say she should certainly give a good account of herself and I’m hoping she can add a bit more black type to her page.

“The top two look like they’ll be tough horses to crack, but the one thing is she’ll be toughing it out. I imagine she’ll be reverting to fences after this.”

Olly Murphy feels Thomas Darby “has a point to prove” when the seven-year-old lines-up for the Matchbook Holloway’s Handicap Hurdle.

Runner-up in last season’s Supreme Novices’ Hurdle at Cheltenham, things have not gone quite to plan in two runs over fences this term so Murphy has decided to put him back over the smaller obstacles and try him over a longer trip.

“He seems in good form. The ground will be a slight concern, but he did run well in the Supreme when the ground was slow,” he said.

“I’m looking forward to stepping him up in trip. He’s obviously got a lot of weight and he’s got a point to prove.

“He ran very well over fences at Warwick and my horses weren’t quite right when he ran at Kempton, but he’s in good form and we’ll have a good idea where we’re going to go for the rest of the season after Saturday.”

Evan Williams is hoping Bold Plan can defy a rise of 10lb for winning at Haydock in November.

“I thought he ran a very good race at Haydock. The handicapper hasn’t missed him and he has gone up a few pounds for standing in his box, but Phil Kirby’s horse (Whoshotthesheriff) has run very well at Ascot since, so he probably deserves it,” said Williams.

“He ran very well in testing conditions at Uttoxeter last season, so I don’t think that will be a problem. I don’t have any issues with the ground or the track, to be honest.

“I think it’s just a question of whether he’s good enough off his new rating – and the only way to find out is to run him.”

Nigel Twiston-Davies does not expect the rain-softened ground to be an issue as Ballymoy bids to lift this prize for a second time.

“He won it last year and he should have a good chance again, I think,” said Twiston-Davies.

“He’s in good form and the testing ground shouldn’t be a problem for him.”

Richard Hobson is just pleased to get Allysson Monterg back on the racecourse in the bet365 Handicap Chase after being absent since finishing fourth in the Cotswold Chase at Cheltenham.

“He’s got loads of ability, but he’s going to need it. He’s been off for a year and it’s not like he’s coming back in a Mickey Mouse race – there’s some good horses in there,” said Hobson.

“He’s been plagued with injuries all his career, it’s such a shame.

“For me he’s a Grand National horse, that’s the aim. He’ll stay four miles all day, but I think this trip is fine for his first run back and if he nicks a place, I’ll be happy.

“He was going great in the Cotswold last year and did a tendon coming down the hill, the same one he’d done before.”

Other smart performers among the 11 runners are Kildisart, Happy Diva, Flying Angel and Espoir De Guye.