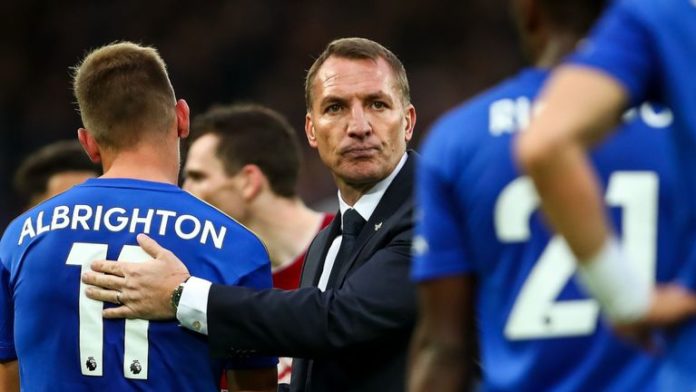 Watch Burnley vs Leicester on Super Sunday from 1pm on Sky Sports Premier League; kick-off is at 2pm. Match highlights available shortly after full time on the Sky Sports website and app

Brendan Rodgers has suggested he is still keen on adding a centre-back to his Leicester squad in the January transfer window, despite ending interest in Juventus defender Merih Demiral.

Leicester ruled out a possible loan signing for Demiral after the Turkey international suffered a knee ligament injury during Juventus’ 2-1 win over Roma on Sunday.

The Foxes have largely relied on Jonny Evans and Caglar Soyuncu in the centre of defence this season, with the pair making 52 appearances between them in all competitions.

They have helped Leicester earn the joint second-best defensive record in the Premier League, conceding just 21 goals in 22 games.

On potential defensive reinforcements, Rodgers said: “If we didn’t end up bringing anyone in then we would currently have four centre-halves here.

Caglar Soyuncu had to bide his time but, in a breakthrough season, he tells Sky Sports how he is learning from Kolo Toure and how Leicester feels like home

“Our idea is to get (Filip) Benkovic out on loan for his development but we can only do that if we have the opportunity to bring in another centre-half.

“You’re always looking to add quality to the squad and of course where we sit and where we’re at it can be tough to bring in that type of player, but the recruitment team here are very renowned for looking at players and being able to get players.

“The club have been very clear in terms of their support that when a player becomes available at the right price then we can do something. There’s still a bit of time to go, there’s a lot of work behind the scenes and we’ll see what we can do.”

Leicester face Burnley at Turf Moor on Sunday, live on Sky Sports, having lost just one of their last seven away games in the league.

Burnley, meanwhile, have slipped into relegation trouble in recent weeks after four successive league defeats – leaving them just three points above the drop zone – but Rodgers is still expecting a difficult match as his side hope to put last weekend’s 2-1 home defeat to Southampton behind them.

“They’re still a very dangerous team,” the Leicester boss said. “When we played them earlier in the season it was a very, very close game and no matter where any team sits in the league the Premier League is exceptionally tough.

“Notoriously everyone knows how difficult it is to go to Burnley so we know we have to be much better than we were last week to have any chance of getting a result.