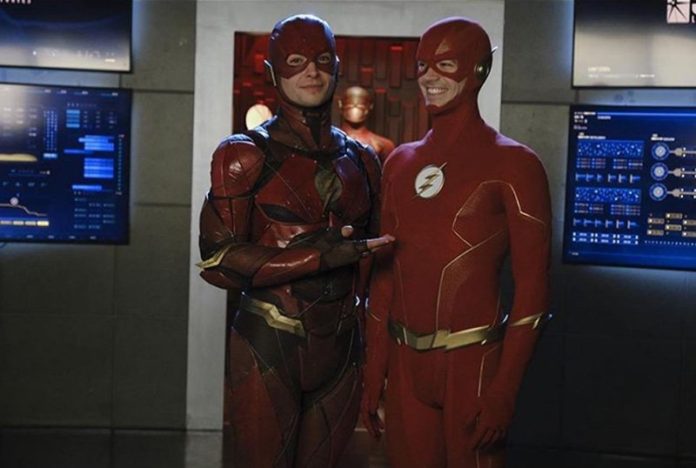 Arrowverse EP explains how Ezra Miller’s cameo came to be

Fans are still reeling after the exciting and unexpected cameo by Ezra Miller’s Barry Allen during the Crisis on Infinite Earths crossover on The CW where he was able to meet the television version of the character played by Grant Gustin. Arrowverse executive producer Marc Guggenheim spoke with Variety about how they pulled off the big moment of bringing Miller into the DC/CW universe, saying chief executive of Warner Bros. Television Peter Roth was key in making it happen.

RELATED: Andy Muschietti Confirms The Flash is Still Based on Flashpoint

I called Eric Wallace who is the showrunner of Flash, and he called up Grant Gustin — because the one thing that was our only concern was the thought we didn’t want to do it unless Grant was 100 percent onboard with it. And he was. He was incredibly enthusiastic and onboard with it. And then we got on the phone with Ezra Miller and told him the scene I had written and he was completely into it. And we just went. We put together a unit of the Flash crew on the Flash set [since Arrow’s team, which had produced the rest of the hour, was gone]. And much to our surprise, no one noticed Ezra Miller was in Vancouver and no one leaked it from the crew, which we appreciate. So we were able to keep it a surprise.”

As far as whether or not Miller’s Flash still exists in the DC television world following the final events in the crossover, Guggenheim said: “I will leave that question to Warner Bros. and DC. They have a wonderful vision for not just Ezra’s Flash, but also the entire DC universe. Jim Lee is the man to talk to.”

As far as Miller’s untitled Flash film from Warner Bros. goes, director Andy Muschietti recently confirmed that the film will still be based on DC’s Flashpoint event as the basis for the script, though it will be a “different version of Flashpoint than you’re expecting.” The movie is scheduled to arrive in theaters on July 1, 2022.