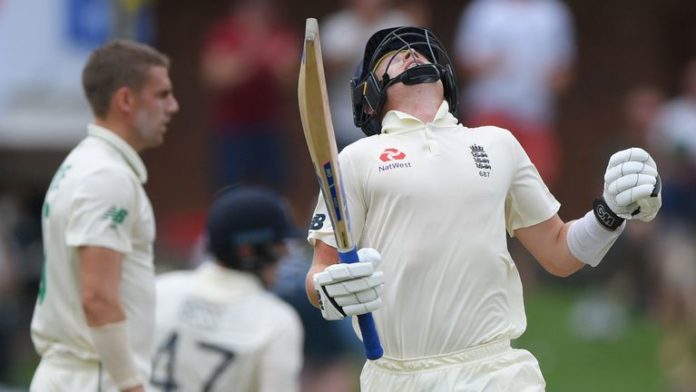 It is a day Ollie Pope will never forget.

The 22-year-old hit his maiden Test century and walked off unbeaten on 135, with England having piled on the runs at St George’s Park. He even capped it off by taking a smart catch at short leg.

Following such a landmark innings, Pope could be forgiven for taking a moment to look back and see how far he has come even just over the last few months.

A shoulder injury at the start of last summer significantly hampered his chances of playing in the Ashes and Pope admitted at that time he had no idea how far away he was from the England team.

He had been given his Test less than a year before but was hauled out after just two games, with a top-score of 28 after three innings. The message was clear: his time would come but patience was needed.

Pope got over the shoulder injury and was back scoring runs for Surrey in no time and although he did not feature in the series, by the end of the Ashes, it was clear he was seen as central to England’s plans to try and regain the urn in Australia.

On Friday in Port Elizabeth he showed exactly why.

In truth, the signs have been there for some time. Even putting aside his absurdly impressive numbers in county cricket, there was enough evidence in his brief international career to suggest Pope is a special talent.

That first hundred could have come against New Zealand in Hamilton, where he was going along very nicely and a three-figure score was there for the taking on the flattest of pitches. However, his selflessness led to him falling for 75 as England chased quick runs ahead of a declaration.

In Cape Town, he was left to shepherd the tail following a collapse. Again he was forced into one-day mode but this time he was rewarded with an unbeaten half-century.

Two excellent knocks for a young player making his way in international cricket but for a batsman, it is all about hundreds – and now he has got one.

“All of us have had the sense that Ollie Pope is a fine young player, who is going to have a long, long Test career but you still have to do it,” Michael Atherton said at the end of the day’s play.

“And it’s a big moment for any cricketer when you get your first Test hundred. You feel you’ve proved yourself to everyone watching, to the dressing room and you feel you belong.”

Anyone who watched his innings would have been in no doubt either, he belongs at Test-match level, perhaps more so than any batsman to come into the England set-up since Joe Root.

Arriving at the crease with England 148-4 and in a spot of bother on the first evening, Pope showed all the composure of a veteran rather than a youngster in just his sixth Test as he batted with great fluency, outscoring Ben Stokes to take the tourists out of trouble and through to stumps.

That calm is now a feature of his batting. For all his talent, when he first came in against India, he was frenetic. Not anymore. No matter the situation, and it varied throughout his innings, Pope remains unflustered, assessing his options and more often than not choosing the right one.

On the second morning, he was able to pick up where he had left off the previous evening, serenely moving the score along, and once Stokes started to motor, there was no panic or thought that maybe he should be doing the same.

Neither did he clam up and leave all the scoring to his senior partner, he continued to bat smartly and sensibly, working the singles with ease and finding the boundary on either side of the wicket when the bowlers strayed.

Even when runs did become a little harder to come by after Stokes’ dismissal and with the prospect of a first Test century within touching distance, the Surrey right-hander remained as cool as ever on the surface, gradually the fluency returned and he brought up his ton in style, whipping the ball through midwicket for four.

As he found himself with the tail again, the party tricks come out again. Even with Kagiso Rabada steaming in and banging the ball in short at 90mph, Pope was unfazed, responding with back-to-back reverse ramps for four. Even Stokes, watching from the England balcony, was shaking his head in disbelief.

“He’s going to be around for a long time, he looks a fine all-round player,” Atherton added.

“He’s not a limited player in the way that some of England’s batsmen are so that partnership with Stokes at five and six before he eventually moves up the order is going to be a key element of England’s game.”

It is early days but Pope seems to have the lot and it is little wonder that while Pope might be looking back, England fans will be looking forward.

Even as Pope removed his helmet to celebrate his first international ton, ‘the first of many’ was being uttered by the watching hordes. It feels oddly inevitable.

“It’s an exciting time,” said Rob Key. “How quickly it can change and how quickly we change as pundits from saying ‘oh England can’t get any runs in the first innings’, ‘they’ve got the wrong technique’ and all these things to, all of a sudden, feeling there is a bit of optimism.”

Sam Curran’s fine cameo and a couple of wickets for Dom Bess before the close, not to mention another brilliant hundred from the far more established Stokes, are part of that but, of the younger contingent, it is Pope for whom expectations are highest.

It is not just hoped he will be England’s next batting star, it is being taken as a given. That is a lot of pressure for a young man who only turned 22 a couple of weeks ago but everything he has done so far suggests he will take it all in his stride.

Expectations are so high that exceeding them will be nigh on impossible but a maiden Test hundred is a big step towards fulfilling them.

Watch day three of the third Test between South Africa and England, live on Sky Sports Cricket from 7.30am on Saturday.