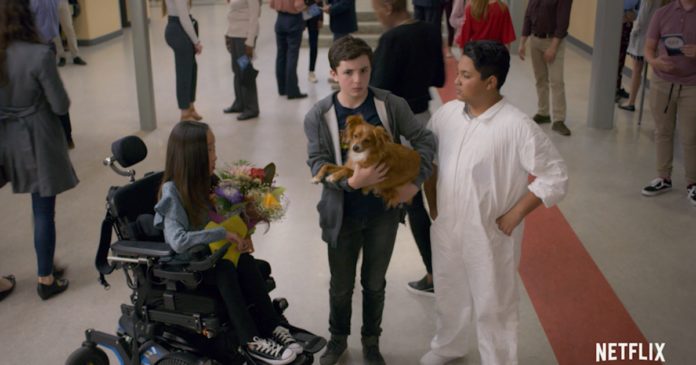 A new kid-friendly Netflix series about a group of pre-teens is not your average family comedy. “The Healing Powers of Dude” covers issues that many teen series miss, with a focus on social anxiety. The show follows 11-year-old Noah Ferris, who has a social anxiety disorder and uses an emotional support dog, Dude, to get him through middle school.

Even 13-year-old actor Mauricio Lara knows the show is unique. In an interview with CBS News, Lara, who plays Noah’s friend and the show’s comedic relief, said he’s learned a lot from the show. “I think I’ve learned that the support system you have around you is so, so vital,” Lara said.

The teen said being on set with kids around his age and having a dog as a co-star was fun, but he knows it was also an important job. “It can’t not be fun being with a puppy all day,” Lara said, adding that he saw how helpful emotional support dogs can be. “I think it’s an amazing thing to have an emotional support animal, and i’m glad we were able to use one in the show.”

Lara’s other co-star, Sophie Kim, plays a friend named Amara who uses a wheelchair. In real life, Kim has Ullrich Congenital Muscular Dystrophy, and has used a wheelchair since the age of four.

The inclusion of an actress with a disability received praise from groups like RespectAbility, and Ability Magazine, which says Netflix found Kim through their job services.

Lara, wise beyond his years, is glad the show portrays young people dealing with mental health and disabilities.

“It’s a topic that’s been talked about among adults, but it’s not really talked about when it comes to kids,” he said. “There are so many kids who suffer from social anxiety disorder, and I think they’re just normal people trying to live their lives and they have the same struggles as us.”

Lara admits he previously didn’t know much about the topics covered in the show, and he hopes watching it teaches viewers valuable lessons, too.

“I hope it can help people become more aware of this topic and, of course, it’s not covering all the struggles, but I think it’s a good starting point, and it’s a good addition to the conversation about social anxiety disorder,” he said.

“It may not be your experience, but it could be the experience of somebody else.”