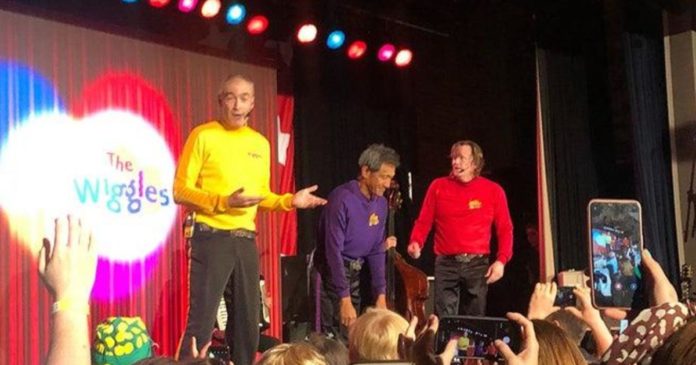 One of The Wiggles collapsed on stage during a benefit concert for wildfire relief in Australia. Greg Page, a founding member of the popular kids’ music group who returned to the stage for reunion performance on Friday, fainted during the final song of the night, “Hot Potato,” according to Australia’s 10 Daily.

Page was shielded from the audience’s view with a stage curtain. The benefit momentarily stopped and the group shortly returned to the stage to say Page “needed medical attention.” They played the final song without him.

A spokesperson for the New South Wales ambulance service said paramedics were called at 10 p.m. after receiving reports about a man who had gone into cardiac arrest.

The spokeswoman said they could not confirm the identity of the patient but did say he was a 48-year-old male who had collapsed. Page turned 48 on January 16, just one day before the concert. CPR was performed at the scene and the patient was transported to hospital in a serious but stable condition, Daily 10 reports.

Shortly after the incident, the band confirmed on Twitter that Page was taken to the hospital after suffering a cardiac arrest. “He has had a procedure and is now recovering in hospital. We appreciate your kind messages and concern,” the tweet reads.

The Wiggles formed in Australia in the early 1990s and rose to worldwide fame performing silly, lighthearted children’s songs. The members each wear an individual color – yellow, purple, red, and blue. The founding members are no longer a core part of the group, but the revamped “New Wiggles,” still wear the same colors.

Page, who wore yellow, has collapsed on stage before, according to several publications which covered his past fainting spells.

When he was 34 years old, Page was diagnosed with dysautonomia, which can cause shortness of breath, heavy chest, light-headedness, dizziness, shaking and fatigue, he explained in an article for Dysautonomia Youth Network of America, Inc.

At one point, dysautonomia left Page unable to perform and he took a break from the group, writing in the article that the condition is often misunderstood. “It is only those who suffer Dysautonomia and related conditions that really do understand what it is like to suffer these symptoms and to be misunderstood by people all around them — family, friends and some doctors,” he wrote.

It is unclear if Page’s collapse Friday night was related to his dysautonomia, as paramedics did not provide any further details.