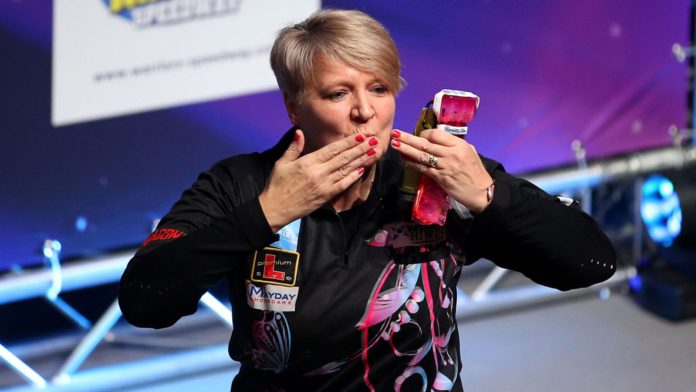 Ashton, who lost to Mikuru Suzuki in the BDO Women’s World Championship final last Saturday and competed at the recent PDC World Championship, had produced a brilliant run to the last four in Wigan but lost 5-4 to Hong Kong’s Leung.

The 49-year-old from Bolton missed out by one point at Q-School on her debut last year, twice reaching the last 16 across the four days of competition.

On the opening day of the 2020 Q-School on Thursday, she reached the last 32, and Friday’s run almost saw her make history.

That near-miss will however go a long way to helping Ashton in the overall Order of Merit standings. The top 12 players who do not qualify automatically will also be awarded their playing rights on the PDC Tour for the next two years – and Ashton is in a great position, sitting fourth after two days.

Leung’s achievement is also notable. The 36-year-old is the first player from Hong Kong since Roydon Lam in 2013 to secure a Tour card and he did it in style with a couple of 100+ finishes in his victory over Ashton.

After the success of Fallon Sherrock at the PDC World Championship, the women’s game has never been in better shape, with Ashton’s performance at the Robin Park Tennis Centre marking a further advance.

More women than ever before have headed to Q-School and while there was disappointment for Sherrock, beaten 5-2 by Chris Lacey in the first round after reaching the last 64 on day one, there is still a weekend of opportunity for the women’s game.

Ashton had performed brilliantly to beat David Taylor, Daniel Nicholls, Chris White, Wes Newton and John Brown to reach the last 16, where she saw off Stephen Burton in a last-leg shoot-out to set up a showdown with Peter Jacques. She averaged almost 90 in another 5-4 victory.

That saw her through to a meeting with Leung, who had produced a 102 average alongside three in excess of 90 in reaching the last four.

Ashton made the perfect start in winning the opening leg before Leung hit back to claim the next three, including a brilliant 140 finish for a break and a 2-1 lead.

Ashton hit back with her own spectacular 130, levelling the contest before the pair split the next two to go all the way to a decider when Leung prevailed.

After the success of the little-known Gary Blades and Jason Lowe on day one, the success of Hong Kong’s Leung was followed by a huge achievement from rising star Bradley Brooks.

The 19-year-old first claimed his card in 2017, winning through on day four, but he failed to fire over the next two years and lost his card when he finished 94th on the Order of Merit.

However, Friday proved successful as he made it two from two at Q-School, winning his eight matches, culminating in a hugely impressive 5-3 win over Brisbane Masters champion Damon Heta.

In Germany, where European Q-School is running alongside the UK event, the second Tour card on offer this week went to Belgium’s Mike De Decker who beat veteran Swede Dennis Nilsson in the final at Hildesheim’s Halle 39.

Austria’s Harald Leitinger was the surprise winner on day one, beating Martijn Kleermaker in a last-leg shoot-out but on Friday, De Dekker triumphed 5-3 to get back his Tour card.

The Belgian won his card in 2016 but after finishing 2019 in 130th place on the PDC Order of Merit, he joined the massed ranks of hopefuls in a bid to reclaim it. He prevailed with nine wins, included a semi-final success over Dutch teenage sensation Justin van Tergouw and Thursday’s runner-up Kleermaker.

The Q-School action continues for the next two days, with the two winning semi-finalists in Wigan, and the winner in Germany, continuing to pick up the automatic Tour cards.

However, a consistent showing will help in the pursuit of the 19 cards available via an Order of Merit at both venues at the end of the four days. The top 12 not already qualified on the UK Order of Merit will pick up a card, while the top seven in Hildesheim will do likewise.