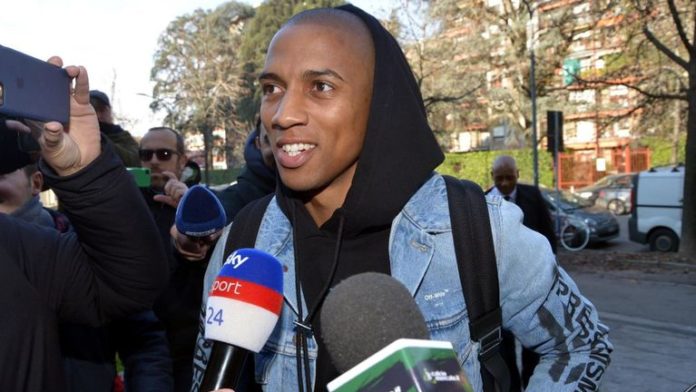 “To Man Utd, you gave me the chance to play with legends,” says 34-year-old after eight-and-a-half years at Old Trafford

Ashley Young has completed his move from Manchester United to Inter Milan on a six-month deal, with an option to extend for a further year.

A deal between the two clubs was agreed on Thursday, with Inter paying a £1.3m (€1.5m) fee plus bonuses for the full-back.

Young travelled to Milan on Friday to undergo a medical ahead of the announcement of his transfer.

He becomes the third United player to sign for Antonio Conte’s Inter side in less than 12 months, following the transfers of Alexis Sanchez and Romelu Lukaku last summer.

The 34-year-old rejected a contract extension at United after spending eight-and-a-half seasons at the club – with Young’s principle decision for departing Ole Gunnar Solskjaer’s squad being based on playing time.

Young posted on his social media: “To Man Utd, you gave me the chance to play with legends, to win trophies, to work under the greatest manager in history and to be your captain.

“Thank you for letting me be part of your story for eight-and-a-half years.

“To the United fans, every time I walked on the pitch wearing your shirt I gave you my all. Thank you for your support during the highs and the lows. I leave as one of you, see you again in an away end soon.”

Young departs after making 18 appearances this season, but has only started 10 league games under Solskjaer.

“Thank you for everything at Manchester United, Ashley. Wishing you the very best of luck,” United said.

Young joined United from Aston Villa in June 2011 and made 261 appearances for the club, scoring 19 goals.

Meanwhile, United are close to reaching an agreement with Sporting Lisbon to sign Bruno Fernandes in a deal which could be worth up to £60m, but it is understood the move is not imminent.

However, Fernandes could complete his move after his final appearance for Sporting in Friday’s derby with Benfica in Lisbon.

United will pay £43m up front for the Portugal international, with an extra £17m in potential add-ons.

The 25-year-old has also agreed personal terms with United which will see him earn around £120,000 a week at Old Trafford.

Ole: Why Man Utd have the tools to beat Liverpool

Solskjaer says it will take a PSG-like performance for United to beat Liverpool on Super Sunday, but says his side have proven they can beat the best.

In an exclusive interview with Sky Sports’ Geoff Shreeves, Solskjaer says his side have risen to the challenge of facing the top sides in Europe before, with Liverpool unbeaten in 38 Premier League games and 27 points clear of United.

Solskjaer referenced away victories over Paris Saint-Germain in March and Manchester City last month as evidence United can play at the level needed to beat Liverpool, and insists his side have the tactical capability to cause them problems.