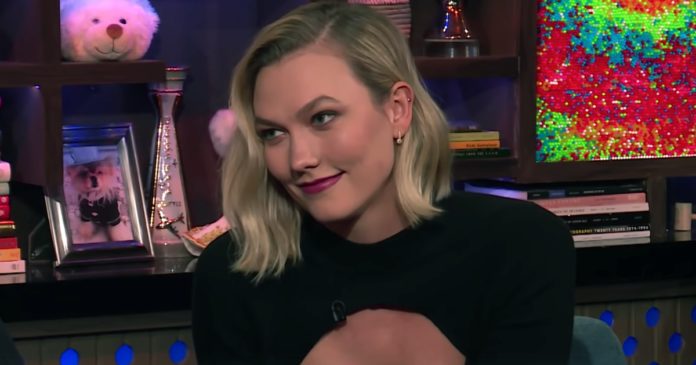 Model Karlie Kloss wed businessman Joshua Kushner in 2018 and has kept the relationship private for the most part. She doesn’t often post photos with her husband on social media, and when someone recently asked Kloss about her husband’s family she avoided the question.

Why? Her husband is brother to Jared Kushner, who is married to Ivanka Trump and serves as a senior adviser to his father-in-law, President Trump. The Kushners own a large real estate firm and have seen their share of lawsuits and tabloid headlines.

The Kushners and Trumps are both polarizing families, and it seemed as though Kloss avoided talking about her ties to them.

But on Bravo’s “Watch What Happens Live” Thursday night, the model and host said she was an “open book” and was willing to talk about the Kushners.

Host Andy Cohen first asked Kloss about an incident that aired about two weeks ago on “Project Runway,” a show Kloss hosts. The contestants were tasked with designing a dress for Kloss, and when a judge pointed to one and said he could “not see Karlie wearing that anywhere,” the designer had a snarky response: “Not even to dinner with the Kushners?”

Fellow designers panicked and the judges gasped — it seemed no one could believe the contestant brought up the Kushners in front of Kloss. In the moment, Kloss told the contestant the challenge was to design a dress she’d wear in Paris. “That was your challenge here. Keep it to the challenge,” she said.

The contestant apologized but was eliminated from the show — and the clip of the incident went viral. Kloss told Cohen on “Watch What Happens Live” that she was honored that the viral clip made her one of the first memes of the decade.

Then she allowed Cohen to ask her about the Kushners and their politics. “Andy, I am sure I’m not the only person in this country who does not agree with their family on politics,” she replied, with fellow guest Martha Stewart remarking it was a good answer.

“I voted Democrat in 2016 and I plan to do the same in 2020,” Kloss continued, answering the question on everyone’s mind: Does she support the administration in which her brother-in-law and sister-in-law work?

Again, Stewart commended her fellow guest for her honest answer. Cohen then asked Kloss about being politically active, and she said she is very passionate about women’s reproductive health and is very active with Planned Parenthood.

“What I gather from things that I’ve heard, is this is quite a love story,” Cohen said about Kloss and Joshua Kushner. “You fell in love in 2012, long before the [2016] election. And you fell in love with a private person and you’ve been through a lot in your relationship… You converted to Judaism,” Cohen continued. “What can you tell us about all that you’ve been through?”

Kloss said she was 19 when she met her future husband and it was a “different world.”

“My man and I have been through a lot together and I’m so proud that he’s my partner. It’s not been easy but it’s worth it and I would make that decision a million times again,” she said.

While Kloss made it known she differs from her in-laws politically, it doesn’t seem there is any bad blood. Sister-in-law Ivanka Trump posted a photo of Kloss and Joshua Kushner on their wedding day in 2018. “So much love for you both as you begin forever together,” Ivanka wrote in the Instagram caption.

Joshua Kushner, the co-founder of insurance company Oscar Health, posted a photo with his brother Jared inside the White House in 2017. But still, the Kloss-Kushner-Trump dynamics remain largely a mystery.