Home Culture Tyler Perry knows which part of ‘A Fall From Grace’ will have... 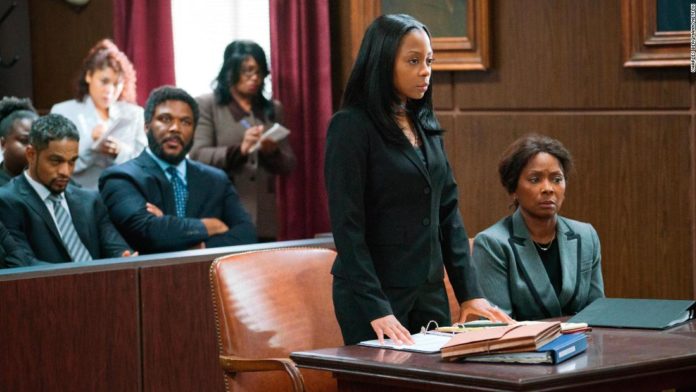 The media mogul has a new thriller out on Netflix titled “Tyler Perry’s A Fall From Grace,” which debuted Friday.
Perry told CNN he was concerned about people sharing an important plot twist and planned on taking to social media to ask viewers to not ruin it for others.
“I love for people to discover it for themselves,” he said. “So stop spoiling it!”
The film centers around Grace Waters, a middle-aged woman who finds love again after rebuilding her life following a painful divorce.
But Waters, played by Crystal Fox, soon discovers that everything isn’t what it seems and lands in jail, charged with murder.
Fox said she wanted to “represent all of those women who may not have been represented.”
“Things can happen to you, but that doesn’t mean you lose sight of your feistiness and your sexuality,” the actress said. “I hope that I honored all of the different shades of women. I just didn’t want to miss us by telling this story, I wanted to represent us.”
The cast includes Bresha Webb as Grace’s young, inexperienced attorney Jasmine, Phylicia Rashad as Grace’s best friend Sarah and Cicely Tyson as Sarah’s tenant, Alice.
Webb talked to CNN about what it was like to work with such legendary actors.
“It’s still ‘Pinch me, this can’t be happening,” she said. “Even during this press tour I’ve learned so much, I’ve gained so much, I’ve grown so much. I’m just honored to be a part of the conversation, to sit at the table.”
“I got to work with the queen, Cicely Tyson,” Webb added. “It’s very rare that a young actress is given a opportunity like this.”
Perry, who directed as well as wrote the film and plays a supporting role, shot it in five days at his Tyler Perry Studios in Atlanta, Georgia.
That sounds like an amazing feat until you realize that Perry is used to doing things his way.
‘I didn’t learn in Hollywood so I don’t know how they do it,” he said. “The way I learned to do it is very guerrilla, it’s very grab it and make it happen. I have a team and a crew that’s amazing and we pull it off every day.”
Perry praised his cast, especially Webb, Rashad and Fox, who joined him for the interview.
“They just all started playing this beautiful symphony for me in every scene,” he said.
There’s one scene in particular which the director said has elicited a strong response from audiences who have seen it so far.
Webb’s character ventures down the stairs into a dark basement, often to shouts of “Don’t go in there, girl!”
“If anyone’s going to give me grief, that’s the only part to for me to give me grief about,” he joked. “Ain’t no black woman in the history of [film] ever went down into a basement so we have to suspend belief for that.”
No spoilers here, but the ending does hint at a possible sequel.
So will there be one?
Perry said that depends on whether the characters have more to say, but Rashad endorsed reuniting Grace and her lawyer Jasmine.
“That’s the real powerful story,” she said. “About these women impacting each other and moving each other towards a positive goal in each of their lives. That’s powerful, I think.”