Home Culture ‘Avenue 5’ takes viewers on a satirical flight aboard a space-faring cruise... 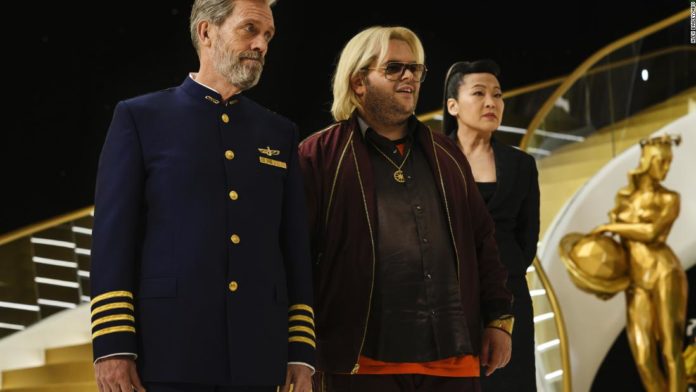 The starry cast includes Hugh Laurie as Ryan Clark, the glad-handing captain of the most ill-fated TV ship since a three-hour tour became “Gilligan’s Island.” (As it turns out, Clark’s accent is as put on as his impeccably pressed uniform, and watching Laurie slide back and forth between British and American English when agitated is one of the show’s simplest pleasures.)
Clark is anticipating easy sailing when the spacefaring luxury ship — in the midst of an eight-week vacation voyage — experiences an unfortunate hiccup, potentially extending its stay in outer space. The powers that be aren’t particularly eager to share that news with the passengers or public, so hysteria reigns not only in the ship’s private quarters but back on Earth, where the team at mission control desperately tries to find a solution.
Temporarily stranded, meanwhile, are a particularly odd assortment of personalities, including Avenue 5 owner Herman Judd (Josh Gad, sporting a Richard Branson hairdo), as eccentric as billionaires get. The harried staff, meanwhile, includes Judd’s mostly unflappable right hand (Suzy Nakamura), the ship’s level-headed engineer (Lenora Crichlow) and its officious customer-relations specialist (“Silicon Valley’s” Zach Woods).
The passengers, too, share center stage, among them a couple (Jessica St. Clair, Kyle Bornheimer) whose terrible marriage isn’t helped by the prospect of staying together in a small cabin much longer than either had intended; and a woman (Rebecca Front) whose loud complaints impede Clark’s efforts to keep everyone calm.
Iannucci has a knack for milking laughs out of absurd, utterly uncomfortable situations — as he did in “Veep” and “The Death of Stalin” — and the complications associated with the Avenue 5’s plight (one hesitates to call it “lost in space”) provide a vast canvas upon which to splatter them.
That said, the show’s manic satirical tone yields uneven returns, and the premise takes somewhat fitful advantage of its futuristic setting. The serialized screw-ups do manage to sustain interest, but with so many over-the-top moments and characters, the show occasionally feels like it’s working a little too hard at being outrageous.
Overall “Avenue 5” isn’t bad, based on the four episodes previewed, but nor is it good enough to merit an open-ended commitment. The bottom line is if the series keeps cruising along at this creative level and madcap pace, unlike characters in the show, there won’t be any difficulty finding a way to jump ship.
“Avenue 5” premieres Jan. 19 at 10 p.m. on HBO, which, like CNN, is a unit of WarnerMedia.