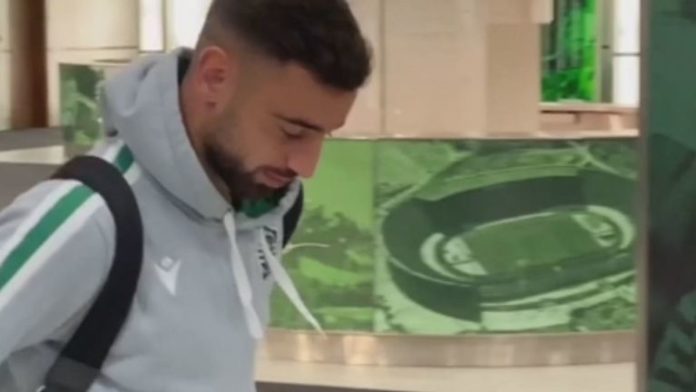 Bruno Fernandes is inching closer to a switch to Manchester United and Sky Sports News reporter Gary Cotterill was in Lisbon on Friday night as the Sporting captain appeared to say his farewells against Benfica.

United are close to reaching an agreement with Sporting to sign Fernandes in a deal which could be worth up to £60m and he made his final appearance for the Portuguese side in Friday’s derby with Benfica in Lisbon.

It gave the 25-year-old the opportunity to say his goodbyes to the club he has represented since 2017.

He, and the Sporting supporters, were determined to go out with a bang but Benfica were keen to make his potential leaving do a more subdued affair, as Gary Cotterill writes…

Bruno Fernandes arrived at the Jose Alvalade Stadium for what might be the last time shortly before 8pm on Friday.

He led the team through a marble corridor adorned with images of previous Sporting heroes, including Cristiano Ronaldo, who loomed large in the corridor, giving a man following in his footsteps to Old Trafford a thumbs up.

All the news crews filmed the warm-ups ahead of the game but the lenses were focused on one man.

Fernandes on the pitch

The home supporters in the stadium gave Fernandes a deafening reception as he led the team onto the pitch. He is their captain.

His every touch of the ball saw him get similar treatment. It is all cheers.

A particular crowd favourite came after 25 minutes when he chased back deep into his own half to slide in and reclaim the ball from a Benfica opponent.

He was certainly not holding back.

Talented, there is no doubt whatsoever about that, but he is a grafter, too.

Fernandes took three meaty tackles before the break where he was left on the turf each time.

The Sporting fans were not happy and you can imagine United supporters wouldn’t have been too pleased either.

As Fernandes left the pitch at half-time, he removed his captain’s armband, with Sporting fans perhaps fearing that they had seen the last of him.

At the interval, he was easily man of the match so far in a game his side were getting the better of without breaking the deadlock.

Deep. Advanced. Left. Middle. Right. I can’t work out where he plays but it is hugely impressive from the Portugal international.

There was a big delay just after the start of the second half as flares and fireworks were thrown onto the pitch by Sporting supporters and the game was stopped by the referee for five minutes. It is indicative of the type of intense atmosphere Fernandes is accustomed to.

Benfica have been running away with the Portuguese top flight this season and a 100 per cent away record has certainly helped. They edged in front here thanks to Rafa Silva 10 minutes from time.

Thanks to the flares thrown on by Sporting fans, the referee added 10 minutes on at the end. Those flares! Would it be enough for a Bruno-inspired comeback?

No. Quite the opposite, with Silva scoring again to condemn Sporting and their captain to defeat.

Bruno Fernandes stood in the centre circle after the final whistle with his head down.

Staff and players from both sides went up to console him, to chat, to say goodbye. Good luck, maybe.

There was a polite applause for the crowd and then he was gone.

No big emotional wave, no tears.

If this was his exit, it was with more of a fizzle than a bang. Unlike those flares.