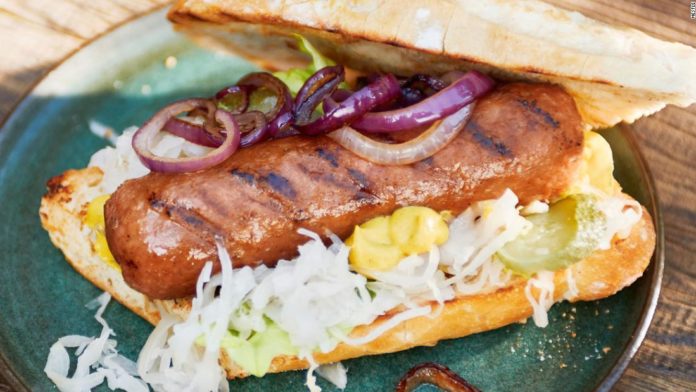 The Swiss company said Friday that it will sell soy-based bratwurst and chorizo-style sausages in 11 European markets under its Garden Gourmet brand starting in March.
American shoppers will be able to purchase pea protein-based Sweet Earth sausages in April that come in habanero cheddar, Asian ginger scallion and chicken apple flavors. Nestlé (NSRGY) will also offer a range of plant-based alternatives to deli meats in the United States.
The products are the latest additions to Nestle’s growing range of meat substitutes, which already includes burgers and schnitzel.
The company made a big move into plant-based food last year when it launched its Incredible and Awesome Burgers under its Garden Gourmet and Sweet Earth brands, respectively.
On Thursday, US restaurant chain Ruby Tuesday announced that it would trial the Awesome Burger in its stores, saying it could eventually become a permanent menu item.
Nestlé is competing against the likes of Impossible Foods and Beyond Meat (BYND), which have also inked agreements with retailers and restaurants to sell their plant-based products.
Nestlé flagged its “increased focus on plant-based offerings” in December when it announced the sale of 60% of its charcuterie brand Herta to Spanish food company Casa Tarradellas. Under the terms of the deal, Nestle retained Herta’s vegetarian business.
The company’s push into plant-based food comes as consumers and governments pressure big business to address issues such as waste, pollution and climate change.
“Compared to a pork-based sausage, a soy-based sausage can account for roughly 90% less CO2, 90 percent less water and 80% less land use,” Nestle said Friday.
The packaging for the Garden Gourmet Incredible sausage has been designed to be fully recyclable.
Nestle was named one of the world’s worst corporate plastic polluters by lobby group Break Free From Plastic last year. On Thursday, the company said it was planning to spend over $2 billion to create a market for recycled plastics for food packaging.