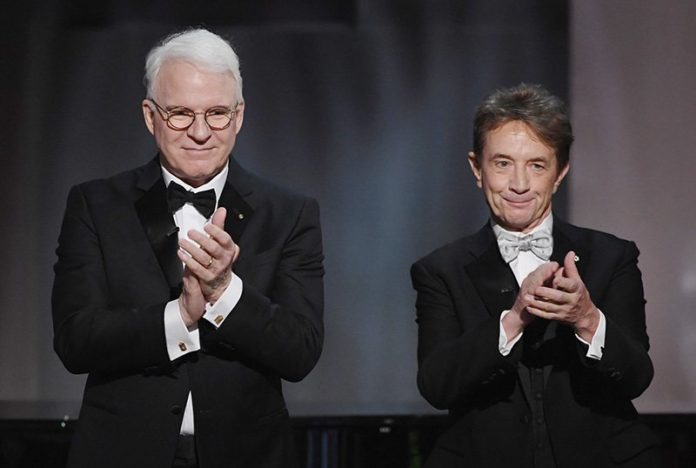 Hulu has given a straight-to-series order for Steve Martin and Martin Short’s untitled true-crime spoof, Variety has confirmed.

The series will follow “three strangers who share an obsession with true crime and suddenly find themselves wrapped up in one.” Martin also serves as a co-creator and writer alongside John Hoffman. Martin, Hoffman, This Is Us creator Dan Fogelman, Jess Rosenthal, and Short will executive produce the 20th Century Fox Television project.

RELATED: New to Hulu February 2020: All the Movies & Shows Coming and Going

Hulu also announced that their series Wu-Tang: An American Saga and Dollface had both been renewed for a second season, in addition to revealing the premiere dates for Season 2 of Ramy and Hulu originals Solar Opposites and The Great.

Golden Globe winner Ramy Youssef’s comedy will return on Friday, May 29 with 10 new episodes; Solar Opposites, an animated comedy co-created by Rick & Morty alums Justin Roiland and Mike McMahan will launch on Friday, May 8; and the genre-bending series The Great starring Elle Fanning and Nicholas Hoult, will arrive on Friday, May 15. You can check out a teaser for The Great below!

A new multi-year streaming deal with DreamWorks Animation was also announced at the TCA’s. Hulu’s first three projects, all Hulu Originals, are titled Madagascar: A Little Wild, TrollsTopia, and The Mighty Ones.

Madagascar: A Little Wild is executive produced by Johanna Stein, and features Alex the Lion, Marty the Zebra, Melman the Giraffe and Gloria the Hippo as kids living in the rescue habitat at the Central Park Zoo.

TrollsTopia, based on the Trolls franchise, follows Poppy and other characters from the upcoming feature Trolls World Tour.

The Mighty Ones takes place in a backyard that is secretly home to tiny creatures such as a twig, a pebble, a leaf and a strawberry, all best friends who belong to three humans whom they mistake for gods. Sunil Hall and Lynne Naylor-Reccardi executive produced the series.