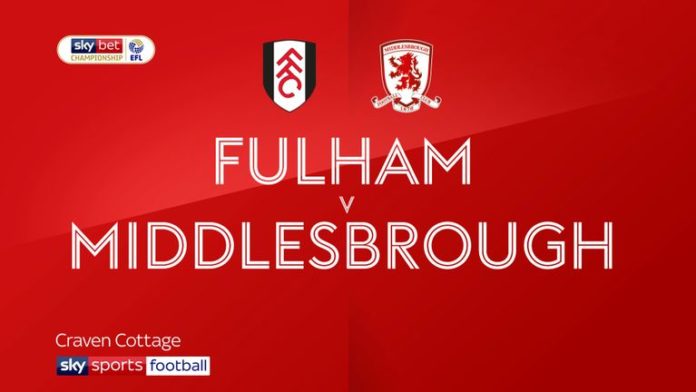 Fulham moved to within four points of the automatic promotion places in the Sky Bet Championship after Anthony Knockaert’s close-range finish secured a 1-0 win over Middlesbrough at Craven Cottage.

Knockaert met Joe Bryan’s low ball after six minutes to nip in front of Hayden Coulson and convert his third league goal of the season as the hosts leapfrogged their west London rivals Brentford into third place.

Scott Parker’s side spurned good opportunities to extend their lead in the first half with Josh Onomah, Bobby Decordova-Reid and Ivan Cavaleiro all guilty of wasteful finishing.

But Middlesbrough, who remain in 16th, were below par and failed to register a shot on target until the final five minutes as their recent revival was ended in the capital.

Man of the match: Anthony Knockaert.

How Fulham applied the pressure

Fulham were without their talisman Aleksandar Mitrovic due to an ankle injury, and the size of the task facing Parker’s team was made all the more daunting by the form of the visitors.

No side had taken more points than Middlesbrough in the previous five games – a run that had seen them move closer to the top six than the bottom three – but Fulham swiftly converted their bright start into a lead.

The hosts, who were beaten at home by Reading on New Year’s Day, showed an immediate reaction to that surprise setback in front of their own supporters. Bryan and Knockaert had already combined for an early shot over the bar, but the Middlesbrough defence had not learned their lesson.

Former Bristol City full-back Bryan showed why he has recently been linked with a move to the Premier League as his pinpoint low cross was gratefully tapped home by Knockaert, who had escaped Coulson.

Fulham were excellent in the opening period but lacked precision with their finishing as moments after Onomah had flashed a fierce drive wide from the edge of the penalty area, Cavaleiro combined brilliantly with Decordova-Reid but was unable to curl his shot on target.

Fulham made two alterations to the side that beat Hull 1-0 in their last outing as Cyrus Christie dropped to the bench while an ankle injury ruled out Aleksandar Mitrovic. Tom Cairney and Joe Bryan returned to the starting line-up.

Jonathan Woodgate stuck with nine of the players who started in the 2-2 draw with Derby the last time his side took to the field in the Sky Bet Championship. Lewis Wing and Ashley Fletcher dropped out as Adam Clayton and Rudy Gestede started.

The Middlesbrough defence was all at sea in the opening half an hour as Onomah wasted a glorious chance to head home unmarked from Knockaert’s cross – but the visitors then came within inches of equaliser against the run of play.

Coulson nearly atoned for his role in Fulham’s goal as his cross inadvertently deflected onto the crossbar, but without Ashley Fletcher leading the line, Woodgate’s side lacked a focal point.

The Boro boss sought to inject greater urgency into his players after the restart as Lewis Wing replaced Marcus Tavernier, but it was Fulham who were dramatically denied a second with 17 minutes remaining by the linesman’s flag.

Cavaleiro’s wicked delivery was glanced beyond Aynsley Pears, but the Fulham defender had moved fractionally too early.

It was not until the 85th minute that the visitors registered a shot on target with Marek Rodak tipping Paddy McNair’s free-kick over the bar as Fulham deservedly took the points.

Man of the match – Anthony Knockaert

Bobby Decordova-Reid and Michael Hector were both outstanding for Fulham, ensuring that Middlesbrough’s hopes of a comeback were ended through their tireless running and discipline, but Knockaert was the standout performer.

In the absence of Mitrovic, Fulham were in need of a bit of magic, and the winger on loan from Brighton showcased his qualities, creating three good chances to go alongside his match-winning strike.

Fulham boss Scott Parker: “It is always a little nervous at 1-0 but we limited them to very few chances. There’s always that little bit of stress but I thought we were fantastic this evening.

“On another day, we could’ve gone in two or three goals up and that would’ve given the game a different picture.”

Middlesbrough boss Jonathan Woodgate: “We’ve had three games in six days with a really young squad and we didn’t really turn up in the first half. We were slow out of the traps and you can’t start like that.

“We needed to get closer to them but we were better in the second half. Ashley Fletcher had been tired after the last two games so I needed to rest him. We’ve been on a fantastic run so I can’t fault their attitude.”