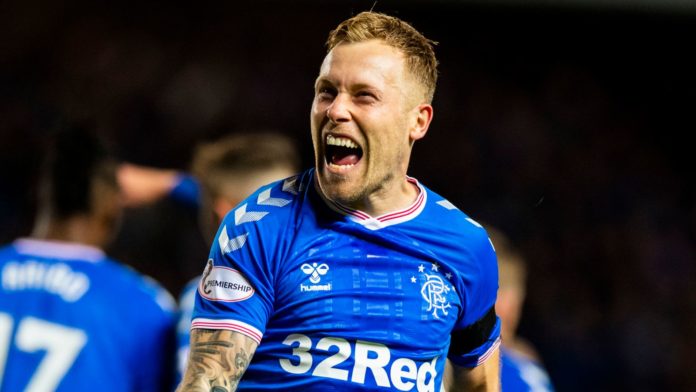 Rangers refused to be caught cold as they re-emerged from the winter break with a 2-0 William Hill Scottish Cup win over Stranraer.

Twelve months ago, Steven Gerrard’s team saw their Ladbrokes Premiership title hopes falter as they suffered defeat at Kilmarnock in their first game back after the January shut-down.

This time, they were able to warm themselves back up for the second half of the season and the title race run-in with a fourth-round clash with Stevie Farrell’s League One part-timers.

It took the Light Blues a while to get themselves back up to speed but goals from Scott Arfield and Jermain Defoe were enough to book their place in Sunday’s draw.

Gerrard made seven changes to the side which claimed victory at Celtic Park three weeks ago but even with teenager Nathan Patterson making his debut at right-back, it was still a fairly strong side for the visit of the League One basement boys.

Stranraer have gone nine months without an away win while the only side in Scotland’s four senior leagues to have shipped more goals than Farrell’s men are Brechin City, who prop up League Two.

But they deserve credit for frustrating Rangers for as long as the 44th minute after refusing to open up.

At times they resorted to filling their own box with everybody bar lone striker Ryan Stevenson in a bid to block crosses and shots.

Gerrard’s team broke through on occasion. Jordan Jones headed over early while captain for the night Ryan Jack could only prod against the base of the post after Defoe’s lay-off was caught underneath his feet.

Joe Aribo took his frustration out on the ball moments after being clattered into by Carlo Pignatiello, stumbling back to his feet to unleash a strike that whistled just wide.

But Stranraer’s resistance was broken a minute before the break. George Edmundson’s attempted flick from Steven Davis’ corner did not come off but Arfield did better as he took a touch before driving through a crowded six-yard box for the opening goal.

? A clean sheet at Ibrox for Mr Brown. pic.twitter.com/VHlezWUe3w

Nikola Katic came close to repeating his Parkhead heroics with a header moments later but Max Currie sprang to his left to keep the hosts’ lead to one at the break.

Only a finger-tip save from the Blues keeper denied Patterson his first Gers goal after 56 minutes as the youngster let fly from the edge of the box.

But the game was put to bed in the 66th minute as Defoe dusted himself down after being tripped by Adam Cummins in the box, with the veteran Englishman rolling his penalty in off the post.